Tigers back in business 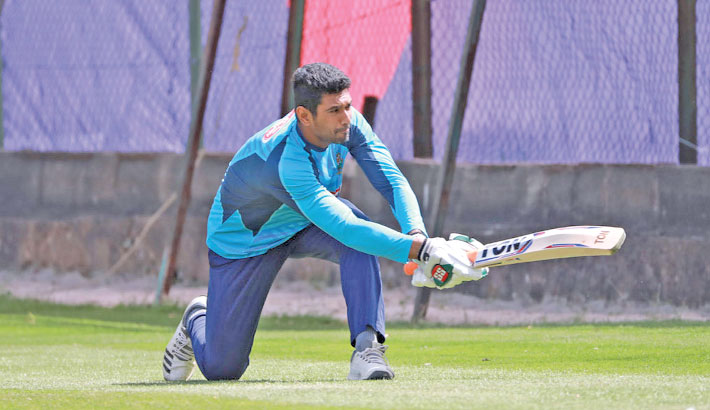 Bangladesh all-rounder Mahmudullah Riyad bats in the nets during a practice session at Edgbaston in Birmingham, England on Sunday, ahead of their 2019 Cricket World Cup group stage match against India tomorrow. - BCB Photo

Bangladesh National Cricket Team returned to business as they began their preparation for the ‘do or die’ match against India after a five days break on Sunday.

Bangladesh players were allowed to take some time off from cricket as they had seven days at hands to play their next match of ICC World Cup 2019.

Tigers will take on India on July 2 in Birmingham in a must-win game but team management decided to keep them mentally fresh ahead of the game considering the fact that they have been in cricket continuously for a long.

Bangladesh played their last match against Afghanistan on June 24, after that 62-run win against Afghans, Tigers were given five days off from cricket to freshen their minds.

In these five days break, many of the players explored different cities of England and some of them stayed in the hotel at Birmingham to relax for a bit.

There are a few injury concerns in Tigers’ camp but according to sources Mahmudullah Riyad is unlikely to be available against India as his chance of recovering before the match is very slim.

If Mahmudullah doesn’t recover before the India game then Mohammad Mithun is likely to replace him as team management believe the latter is better equipped against spin than Sabbir Rahman, who remains the other likely candidate to replace Mahmudullah.

Bangladesh players looked upbeat to overcome India’s bowling, which proved to be versatile and more potent than any other bowling line up in this World Cup.

Boasting two brilliant pacers in Jasprit Bumrah and Mohammed Shami, a wily leg-spinner in Yuzvendra Chahal and a tricky left-arm spinner in Kuldeep Yadav, India look like a side which can defend any kind of total.

India also have a good fifth bowler in Hardik Pandya while a fit again Bhuvneshwar Kumar is waiting to latch on to any opportunity as he sits back in the bench. This is a lineup which remains at their very best at the moment in the cricket’s biggest carnival, much to the headache of other teams.

But Bangladesh, oozing with confidence, looked relaxed and looked a side who knows how to deal with these threats.

Bangladesh’s new kid on the block Soumya Sarkar was reluctant to give India’s bowling line-up much of a respect while young blood Mosaddek Hossain echoed the same sentiment. Bangladesh didn’t win any match against India across any format since their maiden series victory at home in 2015 though they came agonisingly close on three occasions in the last two years largely due to technical and tactical error.

Soumya looked least interested to pay heed to what happened in the past and stated that they are confident that they can give the opponent a run for their money if they can play to their potential at Edgbaston.

“The main difference is that they are India and we are Bangladesh,” Soumya told reporters on Thursday when he was asked to set apart the strength of the two teams before adding that they are not inclined to lose their sleep thinking too much about their opponent.

“Those who will play well on the day, will claim victory. It’s a big tournament. If you think about the name and fame of a team, you will be in backfoot from the very beginning,” said Soumya.

“We are not interested in fearing the big names. We have to plan well and execute it. In which area we are weak, we have to sort it out and plug it. If we can execute our plans well and play well in all three departments, we will definitely win against India,” said Soumya

Soumya said that they need to pick on the bowlers carefully if they want to make the most out of their batting considering India’s bowling department is termed as the best amongst all other teams in this tournament.

“They have World’s number one bowler at their disposal. They have highly skilled spinners. So we have to decide who to pick on that particular day,” said Soumya.

“Picking a bowler is important. So it is important for us to decide who we will pick and whom to play out. It’s a plan that should be devised well and executed well in the match,” he said adding that wicket can also play a big part considering the strength of their opponent.

“Our team is in such a situation where we should not be worried about our opponent’s bowling attack. India definitely are a powerful opposition but if we are able to play our best, the result will be on our side,” he said.

“Wicket might prove helpful for the batsmen. There will be a lot of movement. If we have to bowl first, we will try to pick 2-3 wickets in first ten overs,” told Mosaddek

Bangladesh came really close to beating India on three occasions in the past two years, with two in a row in 2018.

Mosaddek however was not in a mood to think about what happened in the past.

“We can’t think much about the past. We have to move forward,” he said.

According to them if Bangladesh can play methodical cricket there is every possibility that they can upset their mighty opponents, a prerequisite to keep their semi-final hopes alive.

Bangladesh didn’t win any match against India across format since their maiden series victory at home in 2015 though they came close on three occasions in the last two years losing the matches by small margins largely due to technical and tactical error.