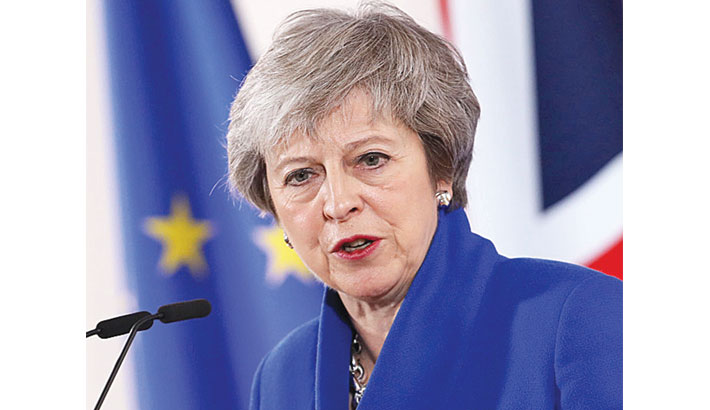 LONDON: Prime Minister Theresa May announced her resignation in an emotional address on Friday, ending a dramatic three-year tenure of near-constant crisis over Brexit and increasing the likelihood of Britain crashing out of the EU later this year, reports AFP.

“It is and will always remain a matter of deep regret to me that I have not been able to deliver Brexit,” May, her voice breaking and close to tears, said outside her Downing Street office.

The 62-year-old leader said she would step down as head of the Conservative Party on June 7.

She will remain as prime minister in a caretaker role until a replacement is elected by the party before July 20.

May, who took charge in the aftermath of the 2016 EU referendum, was forced to make way following a Conservative mutiny over her ill-fated strategy to take Britain out of the European Union.

She will become one of the country’s shortest-serving post-WWII prime ministers, remembered for presiding over one of the most chaotic periods in its modern political history

“I will shortly leave the job that it has been the honour of my life to hold—the second female prime minister but certainly not the last,” May said.

“I do so with no ill-will, but with enormous and enduring gratitude to have had the opportunity to serve the country I love,” she added.

May was pushed into the humiliating spectacle of a hastily arranged resignation announcement following a meeting with the head of the Conservative Party committee in charge of leadership elections.

She had previously vowed to step aside once her unpopular EU divorce deal had passed parliament, and this week launched a short-lived bid for lawmakers to approve it in early June.

MPs have rejected the withdrawal agreement she struck with EU leaders last year three times, brutally weakening May on each occasion.

With her resignation, the manner of Britain’s withdrawal from the bloc appears more ambiguous than ever.

The country has already twice delayed its departure and is now seen as increasingly likely to leave the EU without a deal on October 31, the extended deadline agreed with Brussels last month.

The pound wobbled after May’s announcement, with traders saying much depends on who will succeed her.

A spokeswoman for the EU Commission said May’s departure changed nothing in Brexit talks.

May’s announcement “further amplifies the uncertainty around Brexit,” said Sarah Carlson, an market analyst at Moody’s, who added it “increases the risk of a no-deal Brexit”.

May was under growing pressure to quit following months of Brexit-fuelled political paralysis, which intensified in recent weeks following disastrous results in the May 2 English local elections.

The Conservatives are expected to fare similarly badly in this week’s European Parliament elections when results are announced late Sunday.

“Politically she misjudged the mood of the country and her party,” said Nigel Farage, whose new Brexit Party are predicted to seal an emphatic victory in the contest.

“Two Tory leaders have now gone whose instincts were pro-EU. Either the party learns that lesson or it dies,” he added.

May’s latest effort to force through her despised Brexit deal, which included giving MPs the option of holding a referendum on the agreement, proved her final undoing.

The move prompted a furious reaction from Conservatives—including cabinet members.

May’s departure will kickstart a Conservative Party leadership contest—already unofficially under way—that is expected to be encompass more than a dozen candidates and favour an ardent Brexiteer.

Tory MPs will hold a series of votes to whittle the contenders down to a final two that will be put to the party’s more than 100,000 members.

Former foreign secretary and gaffe-prone Brexit cheerleader Boris Johnson is the membership’s favourite, but numerous Conservative MPs are thought to hold serious reservations about his suitability for the top job.

Johnson, who has repeatedly said Britain should not fear a no-deal Brexit, thanked May for her “stoical service”.