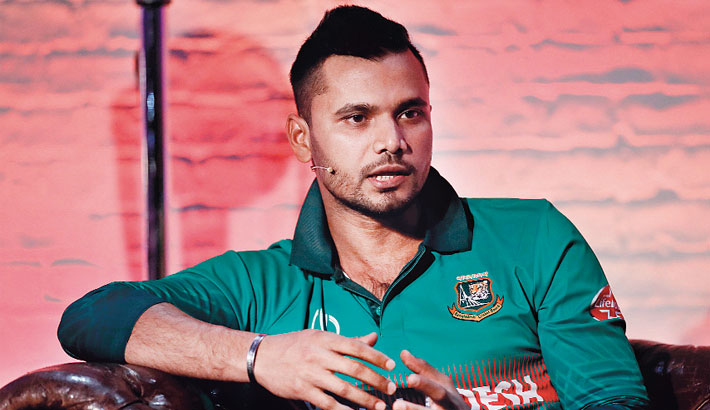 Bangladesh skipper Mashrafe Mortaza aims to convert the chances into solid success. During a pre-World Cup press conference, Bangladesh skipper also emphasised on the importance of a good start in the global tournament.

The press conference was held Thursday in London. All ten captains were presented at the program.

“A team like us can exploit the chance if they can ensure a good start to the match. We have the firm belief of beating any team in the world. However, everything depends on a good start,” Mashrafe said when he was asked about the changed mindset of the Tigers.

The anchor of the program, at a point, asked Mashrafe if he gets a chance to include another player in the squad from any country who would be the pick. At this moment, Mashrafe told the name of Virat Kohli- the captain of India in the World Cup.

Asked whether he was feeling any nerves as the tournament got nearer, Mashrafe came up with a cool-headed response that showed his increased maturity once again.

“This is (playing in the World Cup) not a new affair for me. I think everyone here will say the same thing. As I said earlier, everything depends on the mental preparation. We are really excited as the World Cup is so close now. It is important for us to start well,” Bangladesh captain responded.

The latest edition of the World Cup will be Bangladesh’s sixth appearance in cricket’s showpiece event. In their first 5 appearances, Bangladesh achieved its best result in the last World Cup which took place in Australia and New Zealand, where the Tigers played the quarter-final against India. Before that, they knocked England out of the World Cup on their way to the last 8.

Mashrafe and his men will start the World Cup journey against South Africa on June 2 at the Kennington Oval, London. The Tigers will be at the center of high expectation on the World Cup.

Meanwhile, captains from all the cricketing nations vowed to put a valiant show in the world cup to inspire tomorrow’s cricketers. Virat Kohli remembers how as a young boy he skipped school to watch Zimbabwe play India in a Test match at his home-town of Delhi. It was a chance for him to see his heroes. “I had the time of my life,” he remembers. His earliest memories of the World Cup are from 1996, when the event happened in India. He watched most of those games on TV.

Jason Holder can’t forget the 2003 edition, when West Indies defeated hosts South Africa in the opening match by three runs – “A thrilling game where the momentum shifted a lot” – when nobody expected them to. He was just 11 years old then.

For Morgan, starring in a World Cup has been a childhood dream. But little did he expect that he would one day be leading England in the event, and go into it as one of the favourites.

The men in charge of the teams at World Cup 2019 know just what the World Cup means to their fans – especially for the next generation, because they were once in that place.

“I hope the World Cup is a platform for young kids to look at any of their heroes that play for any of the teams, and aspire to [be like] them,” Morgan told ICC on Thursday, 23 May. “One of driving forces in the England cricket team is to inspire the next generation of young kids.

“It’s not all about performance, because you can’t always rely on performance. To be a role model and to set an example for young kids coming through is more important than performance on a daily basis.”

You’d think this responsibility adds to the pressure of having to perform at a World Cup, but Kohli doesn’t see it that way. According to him, the players thrive with the expectation.