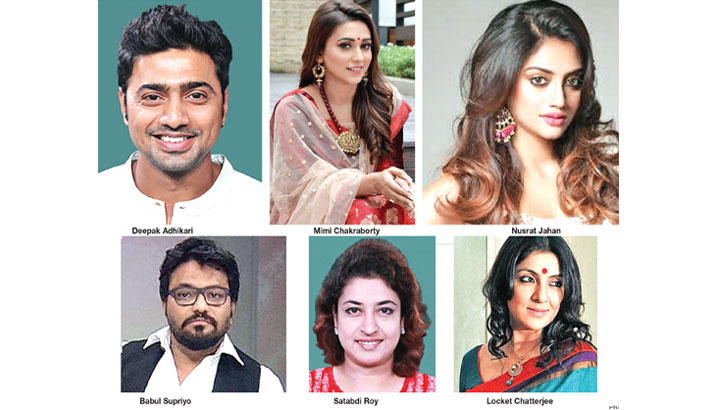 Six celebrity turned politicians won big at their respective constituencies among all the star candidates who contested the Loksabha election for TMC and BJP. While TMC candidate Dev emerged victorious second time from Ghatal constituency, BJP candidate Babul Supriyo returned as MP from Asansol for the second time as he beat TMC candidate veteran actress Moon Monn Sen. Two newbie TMC candidates Mimi Chakraborty and Nusrat Jahan also won from Jadavpur and Basirhat respectively. Scroll down to take a look at the list of the victorious Bengali celebs.

Dev: Dev (maiden name Deepak Adhikari) contested the 2019 Lok Sabha polls on a TMC ticket and was re-elected from the Ghatal constituency. The high-profile candidate beat his nearest rival from BJP, former IPS officer Bharati Ghosh, by 1,07,973 votes. Dev won the constituency for the first time in 2014. He had won many Bengali hearts in 2016 when he gave his maiden speech in Parliament in Bengali.

Nusrat Jahan: Nusrat faced the same fate as Mimi when she was announced as a TMC candidate. Back then the pretty actress insisted she is unfazed by the trolling and focused on working towards the welfare of the people. “During the film promotions, it is our job to reach out to the people. As a political leader, I will have to ensure their welfare as well,” she said. And now all her hard work has paid off as Nusrat defeated her nearest rival BJP's Sayantan Ghosh by 350369 votes. It was a successful political debut for the actress who is well known for his razor-sharp tongue.

Satabdi Roy: Satabdi Roy contesting with TMC ticket retained the Birbhum Lok Sabha seat by defeating her nearest rival BJP’s Dudhkumar Mondal by 88924 votes. In the 2014 Lok Sabha elections, the 49-year-old actress turned politician had won in the constituency beating a CPM candidate by a margin of 67,263 votes, while in 2009 she won the same seat by a margin of 61,519 votes defeating another CPM candidate. So, it’s a hat-trick of wins for Satabdi.

Locket Chatterjee: Actress Locket Chatterjee who was contesting the poll as a BJP candidate won the Hooghly constituency by 73,362 votes defeating nearest rival TMC’s Ratna De Nag. Locket who is also the head of the BJP women’s cell in Bengal is known for her combative nature in contrast to TMC’s Ratna Dey Nag.