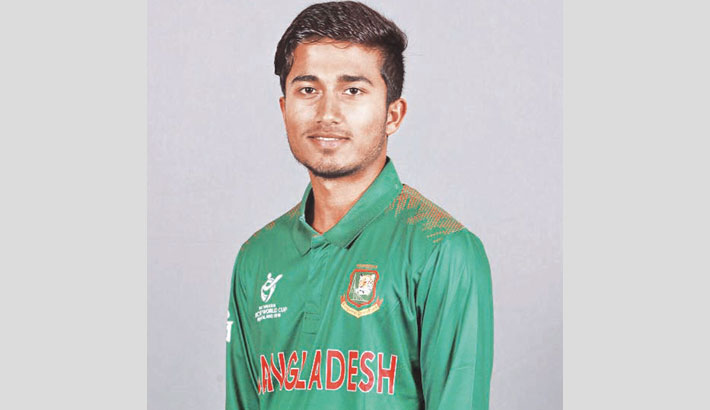 Bangladesh’s young all-rounder Afif Hossain passed sleepless nights following his inclusion in the Caribbean Premier League (CPL) after being picked by St Kitts and Nevis Patriots from the draft on May 22.

“I just could not sleep for a long time as I was also keeping an eye on the draft,” Afif told daily sun while expressing his reaction at Bangladesh Cricket Board (BCB) academy lounge on Thursday.

“I was quite excited and after being picked it only got bigger,” he said.

“I have not played in any franchisee leagues abroad and was watching different post (on the Facebook),” he said.

“It is a huge opportunity for me and would like to grab it with both hands,” he said.

Afif was in-from in the previous Bangladesh Premier League (BPL). He played for Sylhet Sixers. He scored 248 runs for his side. Afif has played thirty T20 matches in his career so far and in those matches he has an average of 20.66 runs with strike rate of 123.24. He has accumulated a total of 509 runs in his T20 career with two half centuries.

Afif said that he is confident to do well in CPL considering he is taking it as just another BPL.

“I have played BPL and to me it (CPL) is just another T20 tournament,” said Afif adding that he was fortunate to share the dressing room with David Warner in the last edition.

Warner led Sixers in the BPL and was very keen follower of Afif as he believed the left handed batsman got huge potential.

“Sharing the dressing room with Warner was a great lesson as he was a big inspiration for me,” said Afif.

“He taught me how to act as a professional as he used to give more than his hundred percent on the field,” he added.

The seventh edition of CPL saw a surprising turnaround for Bangladesh after no one apart from Afif Hossain got a team in the daft held at the Xfinity eSports Arena in London on Wednesday.

A total of 18 Bangladeshi players were drafted including the big names of Shakib Al Hasan, Tamim Iqbal, Mahmudullah Riyad, Mushfiqur who were the part of CPL in the last four years. The reason for their omission from this season is yet to be known.

Youngster Afif Hossain got the team only when St Kitts and Nevis Patriots, a team in which his Sylhet Sixers teammate Nicholas Pooran is the marquee player.

Shakib however was a familiar figure in CPL for the past few years. But no franchise has included him this year. Shakib has played total 21 matches in CPL and has scored 182 runs and taken 23 wickets. His best bowling figure is 6 wickets for 6 runs, which remains the second best bowling figure in T20 cricket history. His omission came as a surprise.

In last year’s CPL, Mahmudullah played for Guyana, his performance with the bat and ball was pretty ordinary, resulting in exclusion as it is believed.

Mehedi Hasan Miraz and Tamim Iqbal also have the experience of playing in the CPL. But none of them got a team.

CPL is set to begin on September 4, with the final on October 12.