Application of Bhagawadgeeta in life 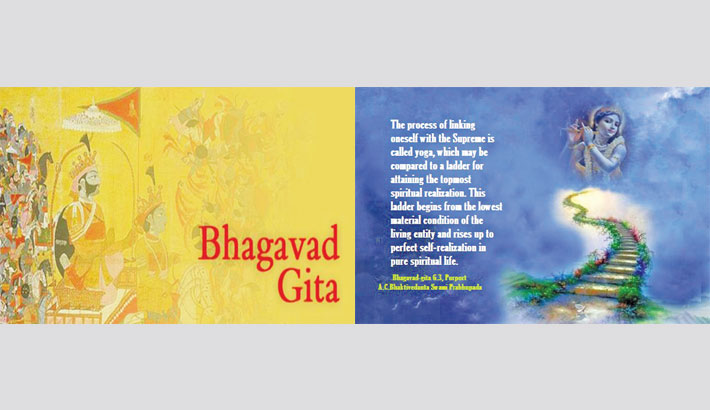 It is believed that Bhagawadgeeta is the most sacred scripture of the Hindus. It is a series of advice given to Arjun by Sri Krishna through conversation on the eve of the war of  Kurukshetra, though practically Arjun is almost a passive listener and  Sri Krishna is the main orator. Out of  60,000 verses in Mahabharat in total, Geeta contains 700 and out of this 700 the very first one is uttered by Dhritarashtra. Out of other 699 verses, 40 are from Sanjay, 84 from Arjun and 575 from  Sri Krishna. Though a part of Mahabharat (chapter 6, Bhisma Parva), Geeta itself is a distinct book. Even if we forget about Mahabharat, then the appeal of Geeta never derogates.

Prior to this, listening to the proposal of compromise from Sanjay when Yudhishtir was ambivalent, Krishna inspired him to the way of work (Karma, Udyogparba – 38). At another place, listening to the sermons of peace from Bhim, Krishna rebuked him harshly (Udyogparba –73,74) which paved the way of happening something dangerous shortly. Though it is established that advice given to Arjun by Krishna on the eve of the war of Kurukshetra is Geeta but the matter is not so simple because it has both prior happenings and long-ranging after effects. The time is very dramatic also. The entire battlefield is full of chariots, horses and elephants, armed soldiers and different types of war equipment. Both Pandavs and Kauravs are standing face to face, fully equipped for fighting in a critical moment of after Autumn (Hemnanta). Bhishma blew the conch shell marking the beginning of the war.

In such a situation Arjun prayed Sri Krishna with pride to see for himself who came to assist Duryodhan, the wicked son of Dhritarashtra. Sri Krishna drove Kapidhwaj (Arjun's chariot) in the middle of two rival forces but just at that extreme moment, a serious mental crisis overwhelmed Arjun. He trembled with the apprehension that he would invite simply sin because he would have to kill his near relations in war who were standing in the opposite. Gandiv (the invincible bow which was given to Arjun by Indra, king of gods) fell down from his nervous hands. For the first time, the great warrior uttered those unbelievable words that he would not fight which sounded very unusual. Such a situation was never seen earlier and it paved the way of Geeta episode of Mahabharat. There were many other people in the battlefield but from the character of Geeta, it appears that except Krishna and Arjun there was none around because no question from anyone else was raised. A serious silence was prevailing there.

Geeta, a combination of theology, philosophy and poetry is a principal base of Indian philosophy. All philosophical theories of the Vedas, Vedanta and Upanishad have been summarised in Geeta. Theology, politics, sociology, domestic affairs, statecraft, warfare, everything has been included in it. Sri Krishna's advice to Arjun regarding duties of a Kshatriya inspired the revolutionists of India. Touching Geeta they vowed to sacrifice their lives in the struggle against British rule for the independence of their motherland. After the death of Hindu verses from Gita are read out praying for the peace of the departed soul. At the outset of any social programme on radio and television, there is a custom to recite from Geera. Presenting Geeta to near ones is considered as an act of virtue.

It is believed that the most important teaching of Geeta is niskam karma (work without expectation of result), prevention of anger and desire. If the desire is prevented then anger arises as a natural side effect of non-fulfilment of desire. Such a book has never been written for the second time, because the situation in which it was told, was never repeated. The mental crisis by which Arjun was overwhelmed may happen to anyone at any time in society -  rich or poor, high or low, aristocrat or ordinary, king or subject and so on. Arjun faced a serious mental disaster because everyone against him was his near relations. Maybe there is enmity between the two families but after all, they are brothers. Amid such inter-relation how he would fight against them? Attacked by a nervous breakdown Arjun declared that he had no intention to get such a victory after killing own people.

Observing Arjun's mental disaster Sri Krishna was compelled to start speaking in such a way that in today's perspective it must be an ideal to teachers and students of schools, colleges, universities, hundreds of managers, high officials and team leaders in corporate houses. On our way in life, we have to face disaster and during the crisis, many of us try to find fault with others but it is one kind of ego which does not bring any good result. Such egoist bosses can never show the right way. To impose fault and to shift liability on others during a crisis means maintaining one's ego and an attempt to stay in a safe side but this is, in fact, a false idea because escaping is no solution at all.

In today's management course on leadership, the first lesson should be taken from Geeta because the highly philosophical words in Geeta are not at all away from reality. In many occasions we have swept away by escaping tendency, ignore our duties and feel reluctant to face the odds. It is nothing but cowardice. Bhagawadgeeta provides us with an effective lesson to drive out that inertia, gain courage and start working again. Sometimes strange situation causes tremendous pressure (as Arjun was attacked by pressure) on us and we get frightened (as Arjun was horrified to lose his near relations) of the consequence of horrible imaginings (as Shakespeare has written Macbeth, act 1, scene 3). Geeta gives us moral energy and mental ability to overcome that psychological numbness just through self-realisation and leads us to the way of reality. At the time of need, anybody can realise this practical applicability of Geeta.

The writer is a former Commissioner of Taxes.