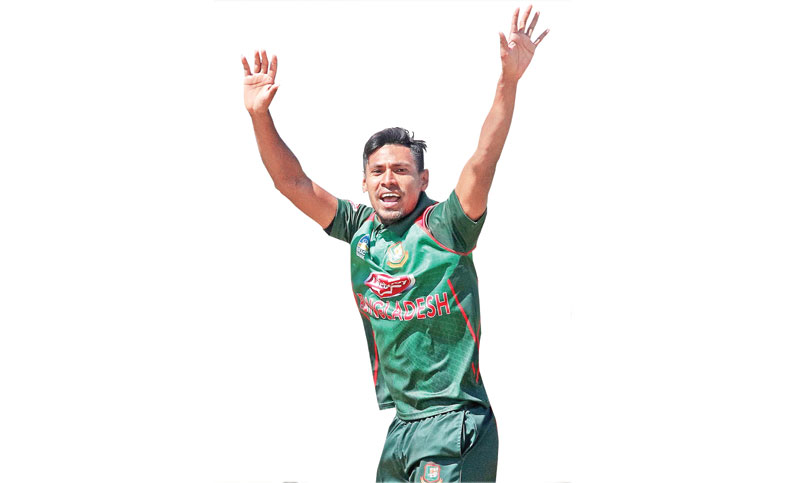 During the last couple of months Mustafizur Rahman’s form looked to be a matter of concern for Bangladesh considering he failed to shine like the way he did when he arrived at the international arena.

The fact that he received his last two man of the match awards at this same Village Ground at Dublin on the back of four wicket haul against Ireland and West Indies respectively after a gap of two years only raised doubts on whether he had lost his magic.

When Bangladesh earned a convincing win against West Indies in their opening game of the tri-nation the only spot of bother looked to be the performance of Mustafizur as he had given away 84 runs in his 10 overs and more so because he had given 93 runs in his previous game.

However, the left-arm pacer played a crucial role in Bangladesh’s six-wicket win over West Indies in their tri-series encounter on May 13 as he picked up 4 wickets for 43 runs and was named the man of the match.

Mustafizur is such a cricketer who stormed into the international scene with so much promise but recently he looked as if he is losing his edge despite his noteworthy performances on consistent basis as he failed to get the spotlight on him by winning any game single handedly on regular basis like the way he did against India on his debut against India.

Mustafizur, debuted in 2015 with a T20I against Pakistan, managed to grab the spotlight while on his ODI debut against India he surprised everyone with his five-wicket haul and followed that with another five-for against the Asian neighbours.

He helped Bangladesh seal the ODI series against India for the first time and has since been considered an integral part of their bowling unit.

While his two man of the match awards came in the space of two years he remained the most successful bowler for Bangladesh with 41 wickets from 28 matches.

“I just wish that it does not take this long to receive my next (man of the match) award,” Mustafizur joked after the award ceremony of the match.

“I am happy that I received the man of the match. I was confident after picking the first wicket and now I am accustomed to bowling in the slog overs after bowling in the death overs for so long,” he said.

“Your confidence will increase if you do well. It is all right that I could not perform in the opening game (against West Indies) but World Cup is coming up soon and I am looking forward to performing there on a consistent basis,” he said.

According to Mustafizur the change of weather played a huge role on his bowling as there was sunshine during the match time the tourist are now getting adapted to the condition better.

Since their arrival the cold weather in Ireland has been a major obstacle for Bangladesh as they looked uncomfortable in the change of temperature more so after arriving from a hot and humid country like Bangladesh.

“In our country it is hot while here it is cold. I really struggle in cold. We came here playing in 32 to 33 degree while here we are playing at six or seven degree so naturally it becomes difficult. Now it is getting warmer,” he said.

According to Mustafizur oppositions are better prepared against him unlike the past and it is making his job more difficult in the present context as he is a firm believer that his go-to deliveries - the slower balls and the cutters - will be his best friends come the World Cup in England in May later this year. The left-armer rose to prominence with his trademark fast off-cutters, troubling the best batsmen in the world, and quickly gained a reputation as one of the best white-ball bowlers.

“When a new bowler arrives, a lot of people don’t know much about him. Now they (opposition) know a lot about my bowling,” said Mustafizur.

“Earlier most of the time there were catches when I used to bowl now that happens when they (Batsman) charge me. Earlier, I used to pick wickets even when the batsmen did not try to hit me (but now that is not the case anymore),” he said.

Mustafizur said after sustaining injury most of the games he played were abroad and that also took a toll on him as he finds it difficult to keep the batsmen guessing due to fact that English wickets do not let the ball grip the surface the way it does at home.

Mustafizur has had to endure a number of injuries in his career so far. The start of the ordeal was in England in early 2016 where he picked up a shoulder strain playing in the T20 Blast.

“Initially I used to play most of the matches at home but after my injury most of the time I played abroad,” said Mustafizur. “If I was playing at home than probably you could see the Mustafiz everyone knew as most of the time the ball grips and change direction in those wickets,” he concluded.