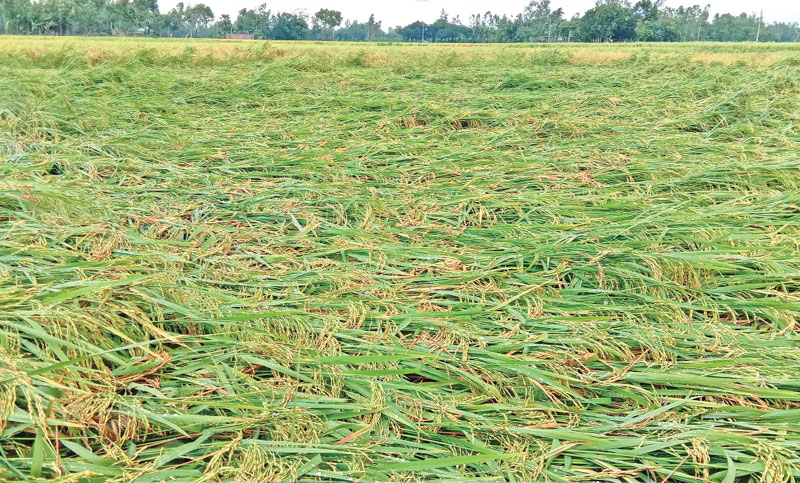 A paddy field has been damaged by cyclone ‘Fani’ in Badalgachhi upazila of Naogaon district on Saturday. — sun photo

Bangladesh heaved a sigh of relief when the severe tropical cyclonic storm Fani weakend as it crossed this calamity-prone country on Saturday without causing any major loss to lives or properties, and officials said that at least nine deaths have been reported so far.

Those, especially in the coastal areas told our correspondents that they were now relieved after two days of panic as Fani spared the country as it weakened after bashing India’s Puri temple city and adjoining areas.

In addition, the cyclone and tidal surges caused by Fani damaged 32 kilometres of river embankments, the disaster response centre said.

Disaster Secretary M Shah Kamal confirmed the deaths of four persons- two in Barguna, one each in Noakhali and Bhola, while the cyclone Fani injured some 100 others in different parts of the country.

He also hoped more than 16 lakh people who took shelter in different cyclone shelters could return to their homes by this afternoon.

The cyclone turned into a deep depression soon after entering Bangladesh and adjoining Gangetic West Bengal in the early hours of Saturday.

“Bangladesh is now risk free as the intensity of the cyclone has weakened further into a land depression,” said Shamsuddin Ahmed, Director of Bangladesh Meteriological Department (BMD) while addressing a press conference at Ministry of Disaster Management and Relief on Saturday.

The cyclonic storm crossed Faridpur-Dhaka region before moving north-northeastwards, weakening into a land deep depression, located over Pabna-Tangail-Mymensingh region and adjoining area at 12 noon on Saturday, according to the BMD.

Deltaic Bangladesh is prone to natural calamities like cyclones and floods annually and the last two major cyclones hit the country in 1991 and 2007, that left thousands dead and injured.

Fani entered Bangladesh on Friday night already in a weakened with form after bashing India’s and damaged houses, cropland, shrimp fisheries and triggered heavy rains in different parts of the country.

It is likely to move in a north- northeasterly direction further inland, under its influence the sky remains overcast and rain or thunder showers with gusty or squally wind is continuing at many places over the country, it said.

Under its influence of the land deep depression gusty or squally wind with the speed of about 50-60 kph is likely at many places over the country and about 40-50 kph is likely over north bay, according to BMD.

The country’s four local airlines including national flag carrier Biman cancelled at least 10 flights and rescheduled others, mostly on the domestic routes, since Saturday morning due jheavy rains and stormy winds.

Besides, he said, around 50 people were injured and hundreds of houses damaged at Char Wapda and Char Jabbar unions during the storm.

Besides, Najmun Nahar,12, daughter of Abu Hanif of Kankra union in Companiganjupazila, was killed as a branch of a tree fell on her during the storm around 9am, said Companiganjupazilanirbahi officer Faysal Ahmed.

In Bhola, housewife Rani Begum was killed as their house at Poraliavillage in Sadarupazila collapsed at night.

Meanwhile, around 40 dwelling houses were damaged in different char areas when Fani swept the areas around 3.45 am, said HaimcharUpazilaNirbahi Officer Ferdousi Begum.

In Bagerhat, Shaninur Begum, 35, wife of Mozahar, was killed as a tree collapsed on her in Sadarupazila at night, said MdJahirul, additional deputy commissioner of Bagerhat.

Besides, 150 metres of an embankment from Bogi to Gabtola were damaged, causing floods in Gabtola, Chaltabunia and DakhshinSouthkhali villages of the upazila.

Besides, 15 people were injured and around 50 houses and a school damaged in the storm.

In Patuakhali, AbidMusulli, 35, son of Harun Musulli, was killed as a tree collapsed on him while he was riding a motorcycle at Manoshitola village in Kolaparaupazila early morning, said Kuakata municipal mayor Abdul BarekMollah.

In Barguna, a woman and her grandchild were killed when their house was torn apart by stormy wind in Charduani village of Patharghataupazila around 2:30am on Saturday.

In Chapainawabganj, a toddler drowned in the flooded village of Kalupur in Gomostapurupazila around 11 am.

The deceased was identified as Morsalin, 3, son of Saiful Islam.

Maritime ports of Mongla and Payra have been advised to lower danger signal number seven but instead hoist local cautionary signal number three.

The Chattogram and Cox’s Bazar ports have also been advised to lower danger signal number six and four but instead hoist local cautionary signal number three, according to the Met office.

Under the influence of the land deep depression and the new moon phase, the low-lying areas of the coastal districts of Chattogram, Noakhali, Laxmipur, Feni, Chandpur, Barguna, Bhola, Patuakhali, Barishal, Pirozpur, Jhalokathi, Bagherhat, Khulna, Satkhira and their offshore islands and chars are likely to be inundated by wind driven surge of 2-4 feet height above normal astronomical tide.

All fishing boats and trawlers over north bay and deep sea have been advised to remain in shelter till further notice.