Industrial revolution and its aftermath 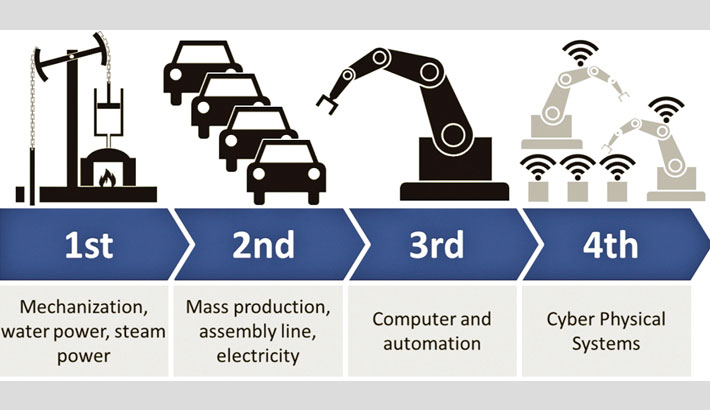 What we achieved and will achieve from industrial revolution is a much-discussed matter. Renaissance stirred to rebuild the world with thought and wisdom, and industrial revolution transformed economy, society and even our way of life. Former gave the basis and later gave structure. These siblings of thought though took place in Europe encompassed the whole world. Japan being far from the source volunteered and could show the world that the Japanese was no way behind. USA from the other end of the Atlantic never legged behind rather led the revolution as an instance for the nations of the world. Australia, South Korea, China, Canada and many other countries are now developed in every sphere of trades. Many countries are in the pipeline to reach the maximum height of development. This is the result of Renaissance and industrial revolution which is a never ending movement in the fields of discoveries and inventions.

Primarily, Francesco Petrarca of Italy in 14th century came forward with the slogan to revive our thought to rebuild and it lasted up to 17th century. Over the time it was not within any boundary, it revives Philosophy, Literature, Political Science, Physics, Arts, Sculptures and other branches of knowledge and education in Europe in particular and in the world in general. On the other hand industrial revolution primarily started in England proceeded from agriculture to industry and textile was its first area to change handmade system to Power Loom. James Watt in mid-18th century like Petrarch in 14th century led the revolution inventing Steam Engine to supply power to the whole machineries. Coal was hugely available in England and it was the only source to produce steam. England developed communication system, particularly in rail communication with steam engine after textiles. Now fields of knowledge are divided in enormous areas and steam engine of its primary shape became almost insignificant in production system. It is acknowledged that its development is the contribution of the renaissance and industrial revolution.

2nd Phase of industrial revolution which may be termed as revolution of scientific inventions with steel and chemicals was led by US and Germany. Energy from steam engine for machineries was not ruled out but was reduced and shifted to other sources due to its low efficiency and high storage space. J.J.E Lenoir developed the first marketable two stroke internal combustion engine ran on coal-gas in 1860s. A more advanced four stroke internal combustion engine was introduced by Nicolaus A. Otto in 1867. US Scientist William Hart discovered natural gas well to drag in 1821 and George Bissell and Edwin L. Drake discovered oil using rig in drilling in 1859. These discoveries led US to invent and introduce modern machineries and they added a new dimension to the industrial revolution. Meanwhile British Scientist Michael Faraday invented electric generator in 1831 to produce electrical energy. So, industrial revolution led the scientists to invent different scientific inventions, paving the energy source easy, smooth and friendly.

We are now passing through the 3rd phase of industrial revolution and waiting for the 4th which is unpredictable and only presumable. Ongoing surge can be termed as cyber age moving through internet, robotics, artificial intelligence, digitalisation of manufacturing and communication technologies.

It is hoped that the world will embrace the 4th phase of industrial revolution very soon. Future is always uncertain and we cannot say anything distinctively about the shape and depth of this phase. Ongoing revolution suggests that robotics and artificial intelligence will be the driving force for productions and trades. They may appear with such dominance that human labour may be obsolete or almost insignificant. Developed countries and countries which are the supply lines for the world after shifting of industries will come across very minimum crises as they have achieved maximum financial fuel for the race. It is already in popular debate in the developed world as to why and how they will bring their industries back to their own countries. Supply lines countries have also started producing and marketing their own products maintaining high standard of quality and affordable cost which are the strength to survive in this competitive age. So robotics and artificial intelligence are in their active consideration to introduce in all spheres of productions and so changes in machineries system is imminent in consideration of the developed countries to bring their enterprises back. Primary establishment cost will be very high but subsequent production cost will be very low and quality will be very high. Supply lines countries are also ready with their own technologies and goods for the revolution. It is appositely predictable that developed countries along with the supply lines countries will lead the phase. They will provide their manpower in the linkage industries as they are skilled and literate. Updated humanoid robots will be invented which will replace the present mechanised robots. Gradual improvement of artificial intelligence may add a special dimension to science and technologies. It is acknowledged that revolution victimises others when leadership is centred to a group. We have seen in the 1st and 2nd phase of the industrial revolution where leadership was done by England and US with Germany respectively. So it is obvious that the remaining world may experience worse if they cannot make them competent for the wave.

Area of work may be extended to cosmos, under seas and under earth. Continental shape of oceans and the cosmos do not have geo-boundary like area of a country. Research and efforts have already been started to bring unexplored fields under control by the developed countries. Survivability of human life in the Mars is in active research now. Hundreds of satellites sent by many countries are moving with successful missions in their orbits. International Space Station has been launched in 1998 and is expected to work till 2030. Space shuttles are regularly sent to the station for different purposes. Satellites are now destroyable from ground by missiles of special type and applying special technology. All of these machineries might be updated with the demand of forthcoming 4th phase of revolution and it may create mass unemployment in the remaining countries. The developed and supply lines countries will have minimum pressure of unemployment as there will be many linkage industries where human labour will be needed. Remaining countries should have preparation to meet the crises well ahead. Our RMG sectors have employed huge number of man-power. RMG may be undisturbed by the forth revolution as it has localised in our country on our perfection and on demand of the two groups of countries. It had not been shifted by others rather they will always need these human run factories to be in operation as introduction of robots and artificial intelligence might not be cost effective because of its diverse minor fields and nature of the trade. Now we are to think of more advance technologies also to introduce in RMG to meet the thrust of the probable changes. This may create marginal unemployment problem which can be addressed if a holistic programme is taken with counsels from experts. Our agriculture should be made technologically advanced and friendly so that any unexpected unemployed population can easily be absorbed. Education of science and technology should be emphasised so that we can also pace with the coming scientific race and our whole production system should be mechanised with sustainable technologies to meet the global qualitative standard. Our man-power should be made educated and skilled so that their demand never falls internationally and can be employed in our domestic fields. Every country of the planet should think of their possible potentials and areas of available unused or less used opportunities.

Science will proceed but it shall be proceeded by human being. Now question is whether man should be ahead of science or science will be ahead of man especially in the age of artificial intelligence. Naturally man shall preserve the right as everything is for human being but preparation and awareness should be given priority. So we should not be afraid of upcoming artificial intelligence rather we should prepare ourselves to dominate the scientific advancement to utilise it for our welfare.

The writer is a student of Mechanical Engineering (Level Four), MIST, Dhaka.