Power generation comes down one third due to Fani 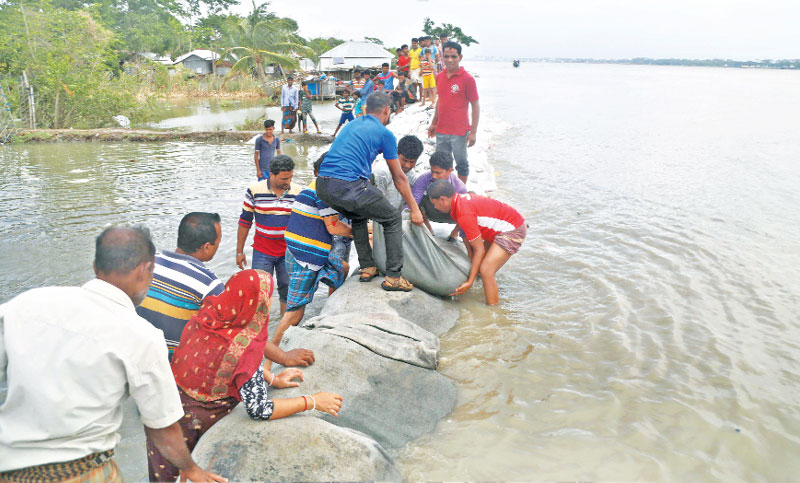 Local people are trying to protect an embankment by placing sand bags in Mongla upazila of Bagerhat district on Saturday after cyclone ‘Fani’ hit the area. sun Photo

Around 25 percent people in rural areas including the costal and river belts are out of power as electricity poles have severely been damaged due to the cyclonic storm Fani that swept over the country yesterday, a top official said.

Now, the rural electrification has a total coverage of 2.60 crore consumers only.

“The electricity supply had been suspended since Fani made landfall. We have been able to resume power supply to 75 percent areas so far till 5pm Saturday,” REB Chairman Moin Uddin told daily sun yesterday.

He added that the costal belt of Khulna and Chattogram and the river belt of Chandpur, Kishurganj and Mymensing were affected due to damage to over 150 electric poles.

The chairman said consumers have been facing severe power outage.

“I hope we will resume full power supply by tonight or tomorrow,” he said.

He added that REB was assessing the actual loss due to the cyclone damage.

Besides, the power generation has come down over one third to 3500MW on Friday due to cyclone, power division chief coordinator AKM Humayun Kabir told daily sun.

“Thanks Allah that we have resumed power supply in full swing today without facing any hurdle,” he said.

The power demand came down on Saturday due to the closure of most of the public and private offices, he said.

The power division has been able to tackle any major disruption to power, thanks to automatic power control system on supply side, he said.

He added that the officials of power division were working relentlessly to restore the power supply during Fani.

He said the construction work at the under-construction 1320MW Payra and Rampal power plants began Saturday.