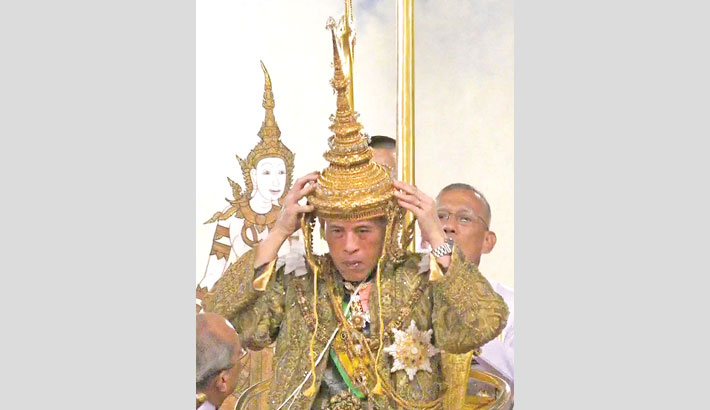 BANGKOK: King Maha Vajiralongkorn, Rama X of Thailand, was crowned Saturday in a dazzling show of pageantry, laced with Hindu and Buddhist ritual, vowing to reign “with righteousness” on behalf of the Thai people, reports AFP.

Starting at the auspicious time of 10:09 am (0309 GMT), the public was granted a rare window into the cloistered halls of Thai power as the key rituals of the three-day coronation began.

King Vajiralongkorn is the tenth monarch of the Chakri dynasty, which has reigned since 1782.

He ascended the throne over two years ago following the death of his beloved father, but waited until after a long mourning period before setting his coronation date.

Saturday’s sombre ceremony opened with the white-gowned king—the folds of his robe leaving one shoulder bared—receiving sacred water from across Thailand and dabbing it gently across his face at a shrine inside the Grand Palace complex.

A cannon salute marked the moment as pipes played and Buddhist monks chanted.

Several grey-haired Hindu Brahmins were also in attendance at the syncretic ceremony, which symbolises Rama X’s transformation from a human to divine figure.

He later took his seat under the umbrella of state and was handed the Great Crown of Victory, a tiered gold 7.3-kilogram (16-pound) headpiece topped by a diamond from India.

Uttering his first, brief royal command he vowed to reign “with righteousness” for the benefit of the Thai people. His fourth wife, Suthida—married in a surprise ceremony days before the coronation—was invested as Queen, kneeling in respect in front of her husband who sat on a throne.