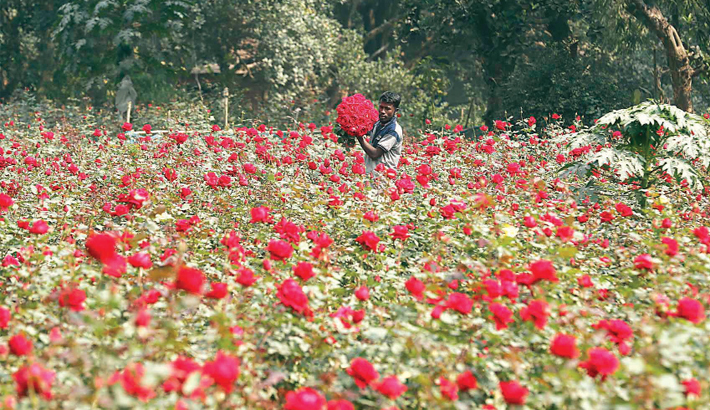 A cultivator collects Milan red rose from his full-bloom garden at Birulia village in Savar, on the outskirts of the capital, on Friday. Almost all the farmers of the village prefer selling their products to buyers of Shahbagh, Farmgate and Banani in the capital. — Reaz Ahmed Sumon

The government has initiated a move to strengthen the country’s overall flower marketing system to facilitate some 20 lakh people involved in flower farming and its value addition, reports BSS. 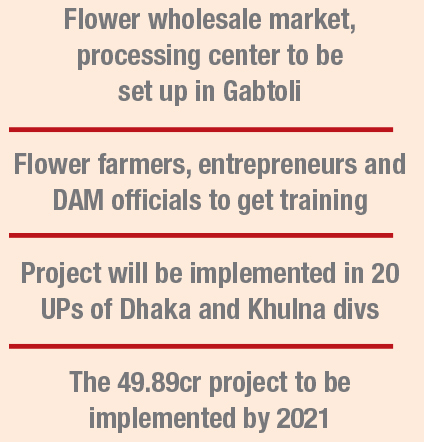 The official told BSS that the project was approved by Planning Minister MA Mannan and then it was placed before the last meeting of the Executive Committee of the National Economic Council (ECNEC) for appraisal.

The project will be implemented at 20 upazilas under six districts of Dhaka and Khulna divisions by June, 2021 with an estimated cost of Taka 49.89 crore.

The main objectives of the project include extending marketing services in the project areas as well as facilitating the flower farmers in getting the just price of their produces through creating direct market linkage.

Flower farming is now going on in full swing in 22 districts across the country including Jashore, Jhenidah, Satkhira, Chuadanga, Gazipur, Bogura, Rangpur, and Rajshahi.

Besides, some 20 lakh people in the country are involved in flower farming and its value addition, added the official.

The main project operations include establishment of a flower wholesale market and processing center at Gabtoli in the capital, imparting training to some 540 flower farmers, entrepreneurs and 50 officials of DAM on flower production and its marketing.

Besides, there will be formation of 100 marketing teams, establishment of four assemble centers, procurement of processing and packaging machineries.

The Pre Evaluation Committee (PEC) meeting on the project was held on October 1 last year where the Planning Commission recommended for implementing the project.