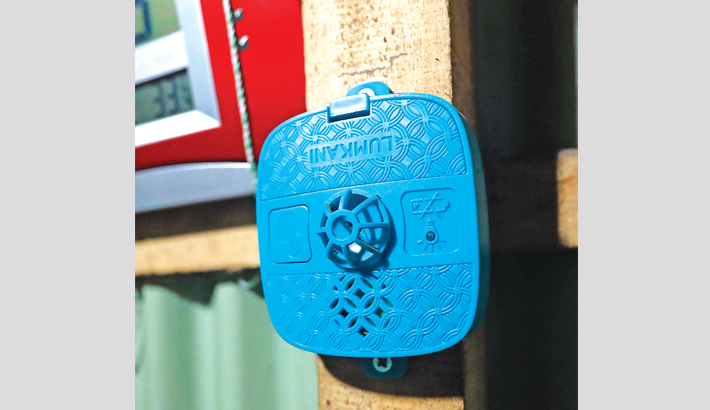 Lumkani, a fire warning device, has been installed in a house at Korail slum in the capital’s Mohakhali. The photo was taken on Friday. — sun photo

When there is a fire in slum, it quickly spreads and leaves behind only ashes and which means that those who are affected become paupers again. But, an inexpensive device called Lumkani is here to save these unfortunate people.

Fire service officials said bamboo, wood, plastic and tin sheets are the main components of homes in slums and thus they completely wipe out the affected areas. Besides, fire fighting and evacuation are very difficult in slums due to high density of people and extremely narrow lanes.

Kuril slum in Mahakhali area is one of the largest in the capital and people with different backgrounds, including teachers and office executives, reportedly live here besides day workers and domestic helps.

A number of fire incidents in this slum gutted shanties to ashes and left several thousand people homeless.

Due to narrow alleys inside the slum, fire fighters had to leave their trucks and walk about half a kilometre to reach this slum and thus the losses in fire was much more than in other places, a fire official said.

A new alarm system named Lumkani has hit the market to save lives and property in slums, and may as well be useful in other structures. Lumkani is an early warning fire alarm system and it is already in many Dhaka slums.

The device, especially designed for the slums have been successfully trailed in the slums of South Africa since 2014.

This low-cost device, connected to each other and a central watchtower via network, is a heat detector, unlike traditional detectors which respond to smoke.

Lumkani is a small blue box that measures the rate of temperature rise, rather than detecting smoke which helps in reducing false alarms. It will give a signal, if there is a sudden increase in temperature in the house.

An alarm will be activated in all houses within a 60 metres (200 ft) radius if the initial alarm is not deactivated within 30 seconds. Besides, it also sends text messages via mobile phone and notify people in cases of emergencies.

The whole network works through a central device. The central device of the network is connected with GPS and notifies the fire department for urgent help.

Work is still going to ensure mobile SMS service properly and officials said the device would be installed in all the slums soon after correcting the problem.

A number of volunteers in the slum are training slum residents under the Urban Slum Fire Readiness project. After its launch in 2017, the project is now undergoing experimental testing. World Vision Bangladesh is working to increase its use in Bangladesh.

Fatima Meherunnessa, project manager of World Vision Bangladesh, said slum homes were made mostly of tin and wood, besides being attached to one another. This helps fire to spread quickly.

“We thought how to reduce the losses. If we come to know the source of the accident at the earliest, then we can take action quickly …. Which saves lives and property,” she added.

Slum dwellers welcomed the device and they hope Lumkani will successfully prevent major fires. After installing the devices in the two slums, the residents were alerted and major fire incident was averted.