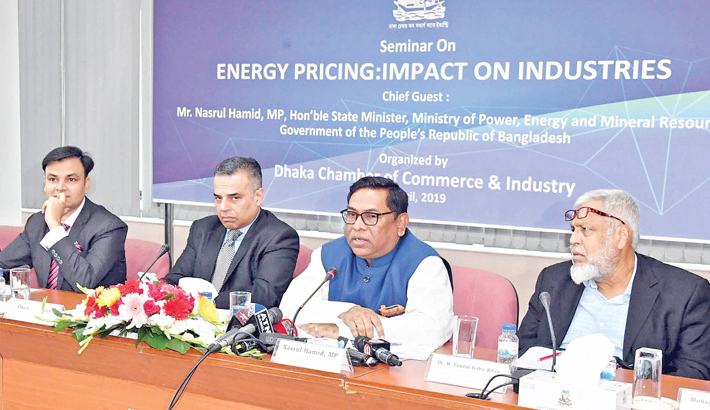 State Minister for Power, Energy and Mineral Resources Nasrul Hamid speaks at a seminar on ‘Energy Pricing: Impact on Industries’ at DCCI auditorium in the capital on Thursday.

The government wants to increase gas prices by about 300 percent for captive power plants with a view to encouraging entrepreneurs to use national grid power.

“Please forget about low-cost gas for captive power. It’s not efficient,” said State Minister for Power, Energy and Mineral Resources Nasrul Hamid Bipu discouraging industrialists to use gas in captive power. “Not only 96 percent, we want to increase gas price by 300 per cent for captive power,” he added.

The minister also called upon the industrialists to invest in Economic Zones to get uninterrupted supply of gas and electricity. The government has already prepared a Gas Management Master Plan to improve the energy situation.

He said that government will ensure affordable electricity price for the consumers.

State Minister made the statements while addressing as the chief guest at a seminar on "Energy Pricing: Impact on Industries" organized by Dhaka Chamber of Commerce and Industry (DCCI) on Thursday.

“The government is giving huge subsidy on gas and electricity prices, now we are trying to adjust the price. Ultimately the cost would be increased by 2-3 percent which us nothing, business people may afford that easily. If it affect them, government will look after their interests,” said  Nasrul Hamid.

State Minister said government is focusing on hundred percent accessibility to reliable and efficient services at affordable prices. He said gas well exploration is a complicated task and it takes time and huge expenditure.

Nasrul Hamid Bipu said our existing demand of gas is about 4000 mmcfd, we are exploring about 2700 mmcfd and distributing 3400 mmcfd.

He said outstanding gas bill as of now is about Tk 12,000 crore. He also discouraged captive power generation as its efficiency is 40 percent lower than power plant.

State minister presented a data that cost of electricity generation by domestic gas is Tk 2.57 per unit and if it is from domestic coal it will be of about Tk 6 per unit and from imported coal it is Tk 8.1 per unit.

He said that for smooth industrial production the authorities have to ensure uninterrupted gas supply as well as good PSI (Pound per Square Inch). Due to proposed gas tariff hike, input costs of industry may increase and may have impact on energy intensive industries like Fertilizer, Textile, Denim, RMG, Cement, Steel and allied sectors, he said.

“We need to develop competitive energy tariff diversifying our energy mix. Our local coal reserve needs to be explored and local coal based power generation needs to be emphasized along with focusing on renewable energy and nuclear energy” said DCCI President.