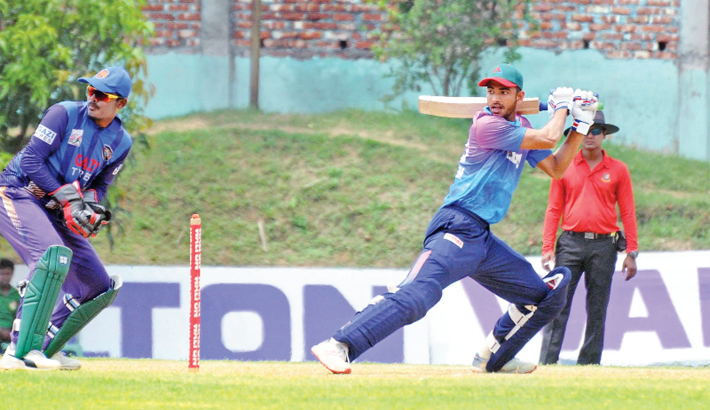 Before heading to the match, Mohammedan needed a win to qualify for the Super League. They required nine runs in the last over to seal the victory. Qazi Onik and Saqlain Sajib hit two fours off Sumon Khan and ensured the win.

BKSP won the toss and decided to bat first in the match. They posted a challenging total of 249 for seven wickets in 50 overs.

Aminul Islam scored the highest 60 runs with five fours for BKSP. Along with him, Shamim Hossain (49), Akbar Ali (38), Parvez Hossain (38) and Fahad Hossain (32) contributed with the bat as well.

While replying, Liton Das and Irfan Sukkur added 77 runs in the opening stand which gave them a must-needed boost to seal the game. Irfan fell for 41 while Liton struck 53.

After the removal of Irfan and Liton, Avishek Mitra and Raqibul Hasan posted 65 and 35 respectively to accelerate the innings.

However, they suffered a mini collapse when Mohammad Ashraful continued on his poor record in the league and Nadif Chowdhury also disappointed to impress as they posted 3 and 0 respectively.

When the match was hanging in the balance, Rajat Bhatia (15), Rahatul Ferdous (14) and Qazi Onik (13) helped Mohammedan overcome the challenge of BKSP. Mohammedan scored 252 for nine wickets in 49.5 overs.

Avishek Mitra was adjudged the man of the match for his outstanding effort of hitting 65 while chasing the target.

In reply, Shinepukur posted 165 for six wickets in 41 overs. Due to the rain and bad light, the match ended in 41 overs, and Shinepukur won it by 15 runs via the DL method.

Shadman was the best scorer for Shinepukur hitting 64, and he was awarded the man of the match as well.

In the other DPL match of the day, Prime Bank Cricket Club beat Gazi Group Cricketers by 34 runs at Bangladesh Krira Shikkha Protisthan Ground 4 in Savar.

Prime Bank accumulated 201 for nine wickets in 50 overs while batting first after winning the toss. Nayeem Hasan and Ariful Haque were the best scorers for them hitting 34 each.

While replying, Gazi were wrapped in for 167 all-out in 45.2 overs in spite of a superb knock of 74 by Myshukur Rahman at the top of the batting line.

For Prime Bank, Nayeem Hasan and Alok Kapali bagged two wickets each. In the end, Nayeem was the man of the match for his all-round performance.