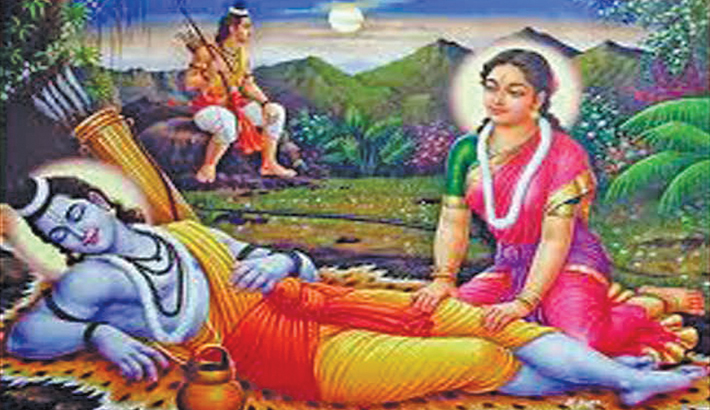 Urmila is one of the few female characters in Ramayan, an Indian epic. She was the second daughter of Janakraj ( king of Mithila, now within the territory of Nepal) and wife of Laxman, 3rd son of Dasharath (king of Ayodhya, now in Uttar Pradesh, India) and brother of Ram eldest son of Dasharath. Sita, the first daughter of King Janak was actually adopted but Urmila was his biological daughter. In a Swayambar Sabha (an assembly where the girl herself selects her husband) Ram won Sita through breaking Haradhanu (a grand bow). When the marriage between Ram and Sita was settled, King Dasarath requested Janakraj to get Urmila as the wife of Laxman. King Janak gladly accepted that request and both the marriages were solemnised on the same day. In this way, Urmila became sister-in-law of Sita, her elder sister and the two brothers, Ram and Laxman, became brothers-in-law of each other. Laxman and Urmila had two sons - Angada and Chandraketu (later they later became the rulers of Tarapadam and Chandrakantam). There is a temple dedicated to Laxman and Urmila in Bharatpur district of Rajasthan in India. The temple was built by King Balwant Singh of Bharatpur in 1870 which is known as a royal temple.

When Ram agreed (in fact, was compelled) to go to forest for 14 years to observe his father's promise (Ayodhya Kanda, chapter 19) Laxman decided to accompany Ram for the whole period of exile. Knowing it Urmila tried to persuade Laxman to allow her to follow him to exile (Ayodhya Kanda) but Laxman suggested her to stay at the palace to take care of his ageing parents and other in-laws. He further told Urmila that he had been going with Ram as a slave and would remain busy to serve them. He would have no time to spare for her. It might be difficult for him to look after her because his prime aim to go to the forest was to take good care of Ram and Sita. Finding no other way Urmila reluctantly agreed and stayed at the palace in Ayodhya (Ayodhya Kanda). 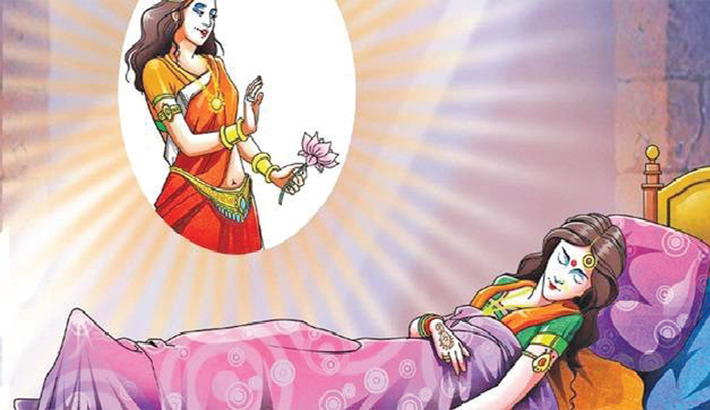 Laxman built a hut for Ram and Sita on the first day of the exile in the forest of Panchavati. At the advent of the night both Ram and Sita went into sleep inside the hut but Laxman stood outside as their guard. After some time he naturally felt drowsy and found a bright female figure in front of him. Being asked by Laxman she introduced herself as Nidredevi (the Goddess of Sleep). At the appearance of the goddess, Laxman could easily understand that he would have to sleep but as it was his duty to guard Ram and Sita for the whole period of exile, he begged exemption from sleep for 14 years from the goddess. The goddess replied that to remain sleepless for 14 years is defiance against nature but being very much impressed with the devotion of Laxman to Ram and Sita she granted his prayer. The matter was somehow settled instantly but the situation became complicated because according to the law of nature someone must share Laxman's sleep. Laxman requested Nidradevi to approach his wife Urmila with the belief that she would not reject the proposal.

The writer is former Commissioner of Taxes.