Sunnah of fasting in Shaban 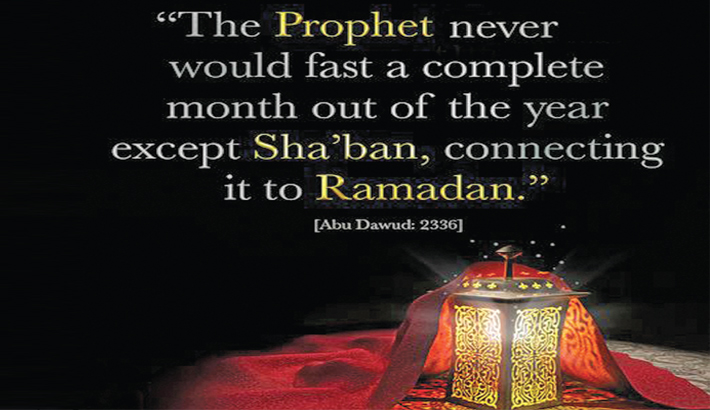 Shaban is the eighth month of the Islamic calendar. This month acts as a bridge between the two blessed months of Rajab and Ramadan. The fifteenth night of this month is known as the "Night of Records" (Laylat al-Bara'at).

Shaban is one of the most important and very significant months for our spiritual works. Every Muslim should start practising more their spiritual works from this month. This month is for the preparation for the holy month of Ramadan. We find some particular instructions in the light of Sunnah of the Prophet (pbuh). It is reported in authentic hadith that the Prophet Muhammad (pbuh) used to fast most of this month. Ummul-Mu'mineen Umm Salamah, (Ra) says: "I have never seen the Messenger of Allah fasting for two months continuously except in the months of Shaban and Ramadan."‏  (Musnade Ahmad, Hadith ‏26022, Abu Daud, Hadith ‏2336, Nasayi, Hadith ‏2175, Ibne Majah, Hadith ‏1648).

But these fasts were not obligatory on him, however, Shaban is the month immediately preceding the month of Ramadan. Therefore, some preparatory measures are suggested by Prophet Muhammad (pbuh).

The Prophet (pbuh) used to fast all the time of this month because this month is very special. In spite of this, we always neglect it. The Messenger of Allah (pbuh) alerted us to this fact when he was asked why he was fasting so much in Shaban. He replied: "It is a month that people neglect"

The blessed companion Usama ibn Zaid (Ra) reports that he asked Prophet Muhammad (pbuh): "Messenger of Allah, I have seen you fasting in the month of Shaban so frequently that I have never seen you fasting in any other month." Prophet Muhammad (phuh) replied, "That (Shaban) is a month between Rajab and Ramadan which is neglected by many people. And it is a month in which an account of the deeds (of human beings) is presented before the Lord of the universe, so, I wish that my deeds be presented at a time when I am in a state of fasting." (Narrated by Ahmad and al-Nasai). 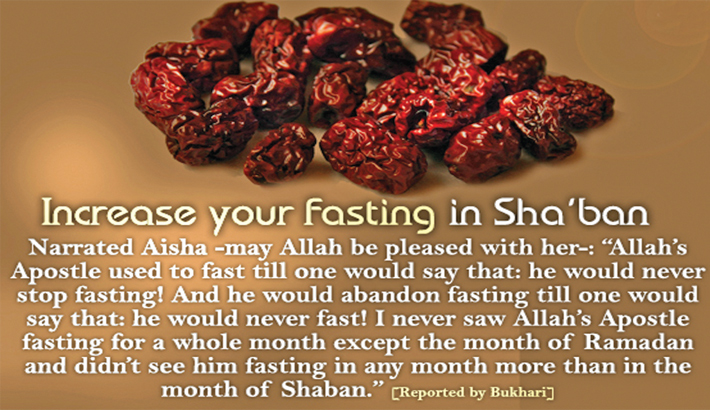 Ummul Mumineen Aishah (Ra) says, "Prophet Muhammad (pbuh) used to fast the whole of Shaban. I said to him, ‘Messenger of Allah, is Shaban your most favourite month for fasting?' He said, ‘In this month Allah prescribes the list of the persons dying this year. Therefore, I like that my death comes when I am in a state of fasting." (Sahih Muslim, Hadith 1156).

In another hadith, she says, "Prophet Muhammad (pbuh) would sometimes begin to fast continuously until we thought he would not stop fasting, and sometimes he used to stop fasting until we thought he would never fast. I never saw the Messenger of Allah (pbuh) fasting a complete month, except the month of Ramadan, and I have never seen him fasting in a month more frequently than he did in Shaban."

These hadiths indicate that fasting in the month of Shaban, is not obligatory, but that Prophet Muhammad (pbuh) did not like to miss it.

According to another hadith, Prophet Muhammad (pbuh) has said: "Do not precede the month of Ramadan with one or two fasts."

The essence of the above-quoted hadith is that Prophet Muhammad (phuh) himself used to fast most in the month of Shaban because he had no fear of developing weakness or weariness before the commencement of Ramadan. As for others, he ordered them not to fast after the 15th of Sha'ban for the fear that they would lose their strength and freshness before Ramadan starts and therefore would not be able to welcome the month of Ramadan with enthusiasm.