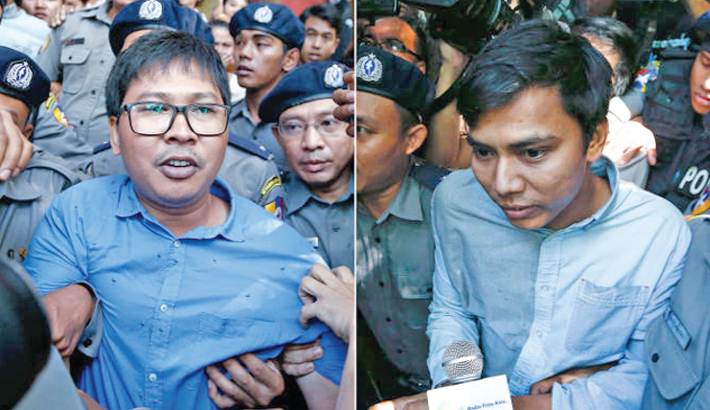 PARIS: The United Nations’ cultural agency said Wednesday that it had awarded its annual press freedom prize to two Reuters reporters jailed in Myanmar over their reporting on the killings of Rohingya Muslims in the country, reports AFP.

Wa Lone and Kyaw Soe Oo have been behind bars since December 2017, detained on claims of violating state secrets.

“They were arrested because they documented a taboo topic regarding crimes committed against Rohingyas,” said Wojciech Tochman, a Polish reporter who headed the jury for the UNESCO prize.

The Guillermo Cano prize, named for a Colombian journalist gunned down in Bogota in 1986, will be awarded on May 2 at a ceremony in Ethiopia on the eve of World Press Freedom Day.

Rights groups have denounced the jailing of the two Myanmar nationals as an attempt to muzzle criticism of the government’s treatment of the Rohingya minority.

At the time of their arrest the reporters were probing the extrajudicial killing of 10 Rohingya men at Inn Din village in northern Rakhine state.

They were convicted of possessing classified information regarding security operations in Rakhine, from where an estimated 740,000 Rohingya fled during an army-led crackdown the United Nations has described as “ethnic cleansing”.

They were sentenced to seven years in prison. In February, lawyers lodged an appeal with Myanmar’s Supreme Court.

Myanmar’s civilian leader Aung San Suu Kyi, who was awarded a Nobel prize over her push for democracy, has refused to use her influence to secure a pardon for the reporters.