Teaser of student of the Year 2 to be released today! 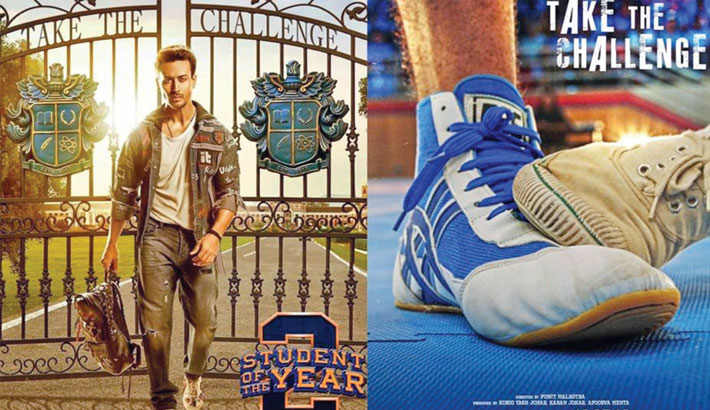 The wait for the teaser of Tiger Shroff, Ananya Panday and Tara Sutaria’s upcoming film Student of the Year 2 seems to be finally over as the makers shared new pictures from the film and said the new session will begin today, reports Hindustan Times.

Actor Tiger Shroff shared a still from the film while standing in front of the college gates and captioned it, “Back to college, and feeling pretty lit about it! #SOTY2.”

He also shared a still with his back towards the camera and captioned it, “Are you ready?” The words ‘Take the challenge’ can be seen written on the gates in the picture.

Karan Johar shared the same picture and promised the film to be bigger than the 2012 original. He wrote, “The Batch of 2019 is ready to enter these gates and this time, it’s going to be bigger than ever!” Dropping more hints about the plot of the film, director Punit Malhotra shared it with the caption, “Get ready to witness the biggest competition ever! The Batch of 2019 is ready, are you?”

Another picture which hints at a boys vs girls match being a part of the plot was also shared online. A girl can be seen stepping on a boy’s foot in the picture that went with the caption, “Take the step, take the challenge.” Tiger also teased the viewers by sharing a placard along with the caption, “Ready to go back? This time, with me!” The placard hints at the teaser of the film arriving on Thursday.

Karan had tweeted earlier, “Am so excited and proud to handed the franchise to you!!! #soty2 coming your way soon!!! Shall we reveal our plans for #SOTY3 just now!!? Or actually let’s keep em guessing.” To this Punit had replied, “Thank you for having the faith Karan. It means the world to me. And you’ll always be the real Principal and the youngest student of the franchise @karanjohar.”

SOTY 2 will mark the Bollywood debut of Tara Sutaria along with Chunky Panday’s daughter Ananya Pandey. Tiger and the two debutants had appeared on Karan’s chat show Koffee with Karan. The star cast of the film also includes Rohit Roy, Farida Jalal and Samir Soni among others. The SOTY actors Alia, Varun and Sidharth will reportedly have a cameo in the film.

Hollywood actor Will Smith will also be seen grooving to Bollywood music in a special dancer number. The actor had flown down to India to shoot for the song that also happened to be a part of his show Bucket List, glimpses of which were shared on his show with the same name. In a teaser of his show, he can be seen grooving to the tunes of the hit SOTY number Radha Teri Chunri.

While Karan had himself directed the original, Student of the Year 2 has been directed by Punit and is set to hit theatres on May 10 this year. The first film from the series came out seven years ago and starred Alia Bhatt, Varun Dhawan and Sidharth Malhotra.