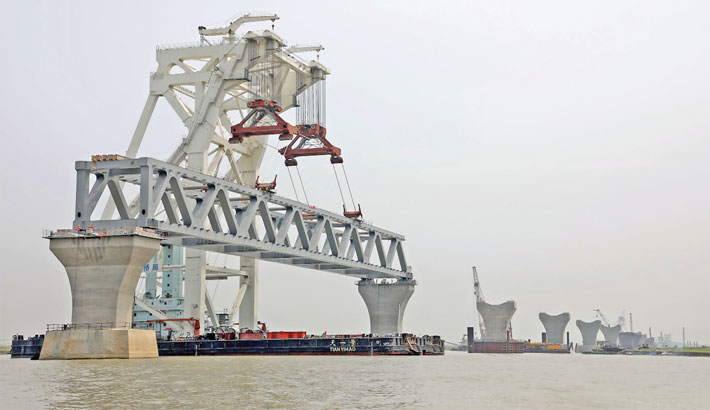 The 10th span of the Padma multipurpose bridge was installed on Wednesday. A floating crane placed the 150-metre span at the Mawa end of the structure. —SUN PHOTO

The 10th span of Padma Bridge was installed on Wednesday, making visible 1,500 metres of the 6.15-kilometre bridge over the mighty river.

The 3,140-tonne span was installed on the 13th and 14th pillars of the country’s largest bridge at noon.

The 11th span of the multipurpose bridge is expected to be set up on the 34th and 33rd pillars on April 20.

A total of 41 spans will be installed on 42 concrete pillars for the bridge, officials concerned said. The construction work on the much-expected bridge connecting Dhaka with southern districts is progressing fast at own cost.

The bridge work began in December 2015 with the first span installed on September 30, 2017.

The length of the steel structure double-deck Padma bridge is 6.15 kilometres.

Trains will run through the lower deck while the road will be on the upper level of the bridge.

After completion of the bridge construction, the capital will be directly connected with 21 southern districts through roads and railways.

According to the project details, on October 14, 2018, Prime Minister Sheikh Hasina unveiled the name plaque of the Padma Bridge Toll Plaza at the Mawa end.

The national economy is expected to witness 1.2 per cent GDP growth rate, while 0.84 per cent poverty will decrease every year after being completed the construction of the bridge with a cost of Tk 30,193.39 crore.