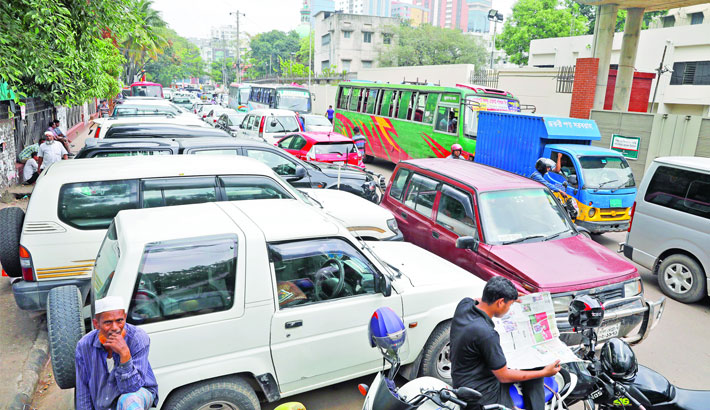 Cars and microbuses have been parked on Abdul Gani Road in front of the Secretariat in the capital, hampering traffic on the busy road. The photo was taken on Wednesday. – Kamrul Islam Ratan

Hundreds of vehicles, mostly private cars belonging to VIPs or high profile officials of different ministries and nearby Biddut Bhaban and Sharak Paribahan pool, are kept parked indiscriminately blocking major portion of the busy Abdul Gani road and Eastern side of the National Press Club in the capital causing major traffic congestion and untold suffering of the commuters.

Surrounding the press club, such indiscriminate car parking and indiscipline traffic management are is a daily affair with law enforcers apparently look on helplessly.

On Wednesday noon, on duty police men, including police sergeants, were present, but no action was taken against traffic rule violators to ensure smooth traffic movement.

When contacted, SM Murad Ali, Deputy Commissioner (DC) of  Dhaka Metropolitan Police South Zone, told the daily sun that most of the motor vehicles belonged to different high profile officials of the secretariat and nearby Biddut Bhaban and Sharak Paribahan pool. “We often take legal measures including video cases against such traffic rule violators.”

We are also sending letters to different ministries repeatedly asking them to keep their vehicles elsewhere, but they pay fines and continue to park violating traffic rules and causing traffic menace,” he added.

Indiscriminate road digging, footpath hawkers, construction workers for metro-rail are also to be blamed for the growing traffic chaos. “We are trying our best to tackle the situation,” the police officer added.

While visiting the area on Wednesday, this correspondent found that several hundred motor vehicles, mostly luxurious private cars, were parked blocking major parts of  nearby busy roads stretching from Western side to Eastern side of the Abdul Gani road to the Secretariat and Eastern side of the National Press club.

Due to the illegal parking of such a huge number of vehicles, a large number of motor vehicles passing through Abdul Gani Road are stuck in traffic jams.

Aktar Hossain, a roadside tea-stall owner said that everyday, hundreds of motor vehicles are parked indiscriminately on these busy roads from morning to night.

These parked vehicles hinder free movement of the traffic causing untold suffering to the commuters, he said.

Besides, many political parties and other voluntary organizations often organize their programmes in front of the National Press Club regularly which draws huge number of people causing severe traffic congestion in and around the area, said one journalist in the club.

Besides, many government offices, government banks and even private ones located at Motijheel, Dilkosha, Purana Paltan,  Arambagh, Kakrail park their vehicles in front of their offices blocking major portion of the nearby busy roads.

An on the spot visit and account of the affected people show that private cars of these offices and banks are contributing to majority of the traffic congestion through helter-skelter parking of vehicles on the public streets.

Hundreds of buses of different inter-district routes including Dhaka-Gazipur, Dhaka Savar, Dhaka-Manikganj are using the busy Fulbaria of Gulistan road for illegal parking.

Late mayor of Dhaka North City Corporation Anisul Huq took a hard stand against illegal parking and evicted all transports from Tejgaon area. After his death, the situation has returned to the previous chaotic state.

According to a recent report published in different Bangla newspapers, illegal parking of vehicles occupy as much as 30 per cent of the city streets and naturally has been seriously hampering normal traffic flow in addition to causing nuisance to pedestrians.

Experts said lack of monitoring as well as inadequate parking facilities and the weakness in traffic management are responsible for the growing illegal parking.