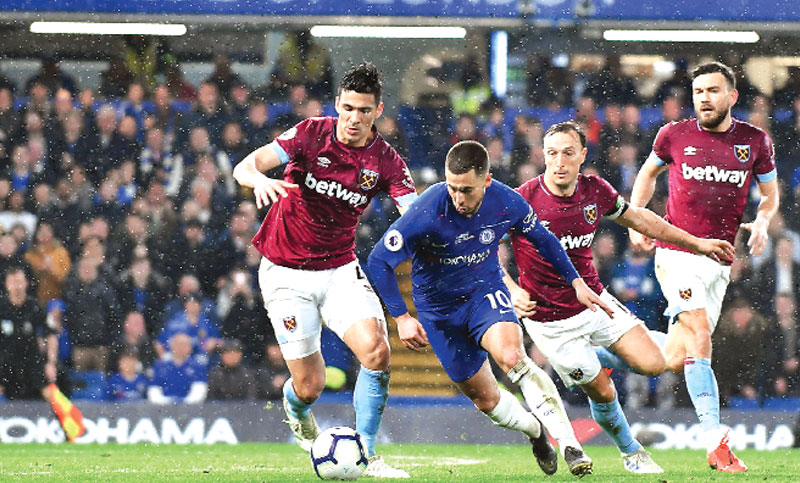 Eden Hazard’s magnificent double earned Chelsea a 2-0 win over West Ham on Monday and moved Maurizio Sarri’s men up to third in the Premier League.

Reports continue to link Hazard with a summer move to Real Madrid with the Belgian refusing to extend his contract at Stamford Bridge beyond 2020.

And he underlined once more how much Chelsea will miss their number 10 should he depart for the Spanish capital with a dazzling display, capped by a sensational solo goal to open the scoring.

Hazard collected the ball just inside the West Ham half, but strode forward jinking past three defenders before coolly slotting past Lukasz Fabianski after 24 minutes.

The hosts and Hazard had to wait until stoppage time to secure the three points as this time he controlled inside the box and fired into the far corner for his 19th goal of the season.

Victory moves Chelsea two points clear of Tottenham and three ahead of fifth-placed Arsenal in the race for a top-four finish, but both their London rivals and Manchester United — five points back in sixth — now have a game in hand on Sarri’s men.

In contrast to Hazard’s form, Gonzalo Higuain has managed just three goals since joining Chelsea on loan in January, all against already relegated opposition in Huddersfield and Fulham.

The Argentine stated his desire before kick-off to make his move permanent should Chelsea successfully appeal a one-year transfer ban imposed by FIFA, but he had another night to forget in front of goal.

Shortly after opening the scoring, a wonderful looping Hazard pass picked out Higuain inside the area but a combination of Fabianski and the post denied him a much-needed goal from a narrow angle.

Marko Arnautovic was then fortunate to avoid conceding a penalty for barging into Hazard, but that seemed the Hammers’ only way of stopping the Belgian captain.

Callum Hudson-Odoi was handed just his second Premier League start and the teenage England international was only denied his first top-flight goal by a flying save from Fabianski to tip his rising drive over.

Higuain’s lack of confidence was in evidence as he passed up the chance to head home N’Golo Kante’s cross and instead saw his shot deflected behind after taking a touch to control on his chest.

Hazard on the other hand was demanding the ball at every opportunity and was first to threaten again after the break with a shot that flashed across the West Ham goal.

However, having failed to muster a single attack of note before the break, the visitors sparked into life in the second half and could have made Chelsea pay for their failure to kill the game off.

Arnautovic’s clever cut-back picked out the unmarked Manuel Lanzini at the edge of the box, but his shot was too close to Kepa Arrizabalaga before Aaron Cresswell then arrowed a shot inches wide of the far post.

The majority of the chances continued to come at the other end, though, as Ruben Loftus-Cheek lifted his effort into the grateful arms of Fabianski with just the Polish goalkeeper to beat.

The Italian was finally able to relax in stoppage time when Hazard was given acres of space to control Barkley’s pass and produced the finish to match his performance.