5 die in lightning across country 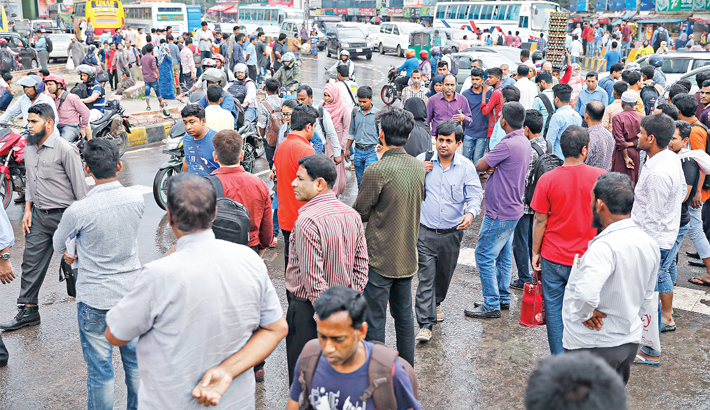 Hundreds of people get stranded at different bus stops in the capital on Monday afternoon after heavy rain disrupts traffic. The photo was taken from Mohakhali area. — sun photo

Five people were killed as heavy rain, accompanied by hailstorm, battered normal life in the capital and some other places of the country on Monday afternoon.

The monsoon rain started pouring in around 3:00pm and continued for half an

hour, creating severe waterlogging on many low-lying roads in the capital.

Traffic almost came to a standstill in the city  due to waterlogging, causing immense sufferings for the commuters.

Hundreds of vehicles got caught in the waterlogging while commuters were seen wading through the rainwater to reach their destinations.

Commuters, including women and children, were seen waiting for transports at intersections to reach their destinations.

They faced great troubles in reaching their destinations due to waterlogging and a transport crisis.

Schoolchildren especially were the worst sufferers from the pouring rain.

“A nor’wester influenced the rain,” he said, adding: “It hit the city around 3:00pm accompanied by hailstorm and gusty winds.”

Many streets of the capital were inundated while vehicles were stuck on waterlogged water.

Rain poured in in summer as a low was lying over West Bengal to Northeast Bay across the country.

The Met office said rain or thundershowers, accompanied by temporary gusty or squally wind, may occur in many places of Dhaka, Rangpur, Rajshahi, Mymensingh, Khulna, Barishal, Chattagram and Sylhet divisions.

It also forecasted moderately heavy-to-heavy rainfalls and hails in places across the country.

Last week six people died as a nor’wester, coupled with hailstorm and rain, swept the capital.

In a forecast, the Met office said rain or thundershowers, accompanied by winds with speed of up to 80 kph, is likely to hit parts of Pabna, Tangail, Dhaka, Faridpur, Madaripur, Cumilla, Noakhali.