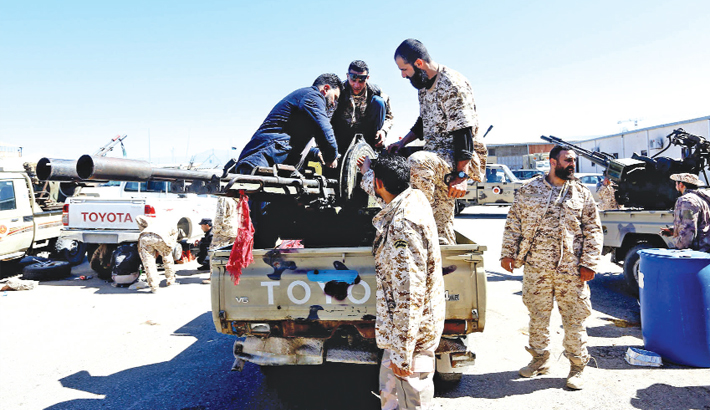 Fighters from a Misrata armed group loyal to the internationally recognised Libyan Government of National Accord (GNA) prepare their ammunition before heading to the frontline as battles against Forces of Libyan strongman Khalifa Haftar continue on the outskirts of the capital Tripoli on Monday. At least 35 people have been reported killed and around 50 wounded in fighting with Haftar’s troops near Tripoli, the UN-backed government said. —AFP PHOTO

TRIPOLI: Libyan military strongman Khalifa Haftar pushed on with his assault on Tripoli Monday, defying international calls for a ceasefire days into a battle that has left dozens dead, reports AFP.

At least 35 people have been killed in fighting since Haftar’s forces launched their assault Thursday, Libya’s unity government said, while the UN says thousands have been displaced.

Oil-rich Libya has been rocked by violent power struggles between an array of armed groups since the NATO-backed overthrow of dictator Moamer Kadhafi in 2011.

Haftar, a former Kadhafi military chief, has emerged as a major player, his self-styled Libyan National Army backing an administration in the country’s east in opposition to the UN-backed unity government based in Tripoli.

Having seized control of much of eastern Libya and buoyed by a series of victories in the desert south, Haftar turned his sights on Tripoli this month, vowing to “cleanse” it of “terrorists and mercenaries”.

After a pause overnight, fighting resumed Monday morning around the capital’s destroyed airport, some 30 kilometres south of Tripoli, and the rural area of Wadi Rabi further east.