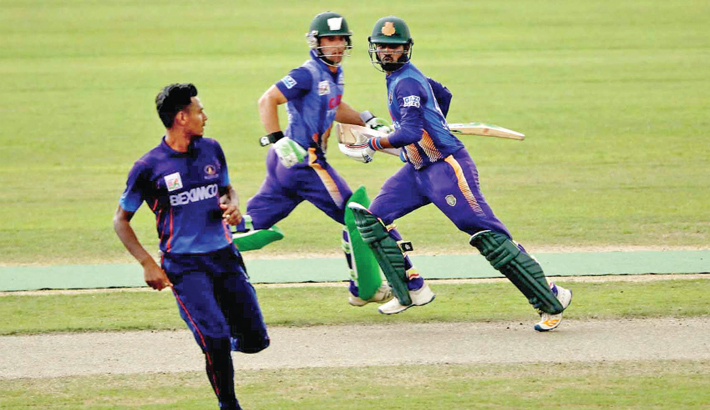 Bangladesh heaved a sigh of relief as Mustafizur Rahman showed glimpses of his readiness to blaze in the upcoming ICC World Cup as he shined on his return to Dhaka Premier Division Cricket League (DPL).

Mustafizur picked 3 wickets in his 6.5 over spell for Shinepukur as the fast bowler returned to DPL after four years at Sher-e-Bangla National Cricket Stadium with their match against Gazi Group Cricketers on Monday. Shinepukur acquired him in DPL players draft from A+ Category.

The left arm pace bowler’s fitness remained an issue as he is out of competitive cricket since the three-match ODI series against New Zealand as Bangladesh opted not to put extra workload and refrained him from fielding in the opening Test of the three-match series.

Though he appeared in the second Test as he bowled only 14 overs and Tigers’ head coach insisted that he wanted his premier fast bowler to keep fresh ahead of the global tournament.

The pacer, popularly dubbed as ‘Cutter Master’ featured in DPL for the first time since 2015 and in between he couldn’t take part in the league due to various injuries and international commitments.

But his return was certainly noteworthy as he not only put the opposition batsmen into trouble but also made sure he can get the most out of it ahead of the World Cup since he was very keen to play the match and was seen practicing with the team at National Academy Ground since returning from his home town Sathkhira.

The ongoing DPL is considered to be the only platform for national cricketers to have match practice ahead of the tri-nation series in Ireland and ICC Cricket World Cup.

“He certainly needed some match practice as he is not playing competitive cricket for quite some time now,” he said.

“The most impressive part is that he could execute his plans and looked to be bowling in a good rhythm,” he said.

Mustafizur made DPL debut during 2014-15 season. In his debut match, playing for Abahani Limited he claimed 5 wickets for 32 runs against Kalabagan Krira Chakra to show his mettle and in the latter part of the year he went on to debut for national team in that season and became an instant sensation with the fifer which helped Bangladesh win the match against India.

He played a big part behind their success against the Indians in that series with his cutter and slower that later became trademark of his bowling.  The Bangladesh pace spearhead so far has played 48 List A matches in which he snapped up 89 wicket at an average of 20.37.