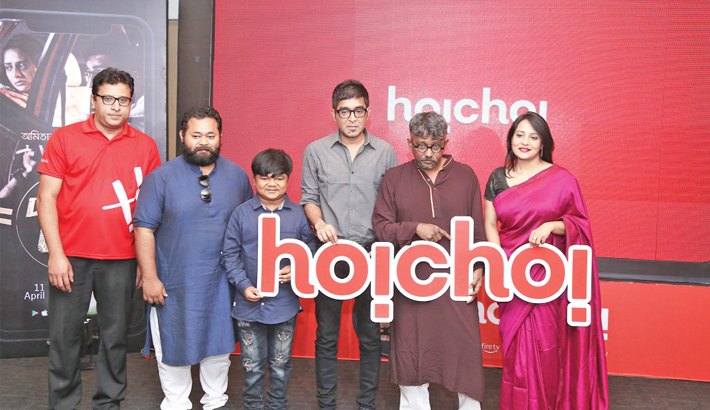 Renowned director Amitabh Reza Chowdhury steps into the world of web series with his new project Dhaka Metro. The trailer of Dhaka Metro was launched on Monday by digital platform hoichoi, amidst media and guests in a press conference held in Pan Pacific Sonargaon.

Producers of Half Stop Down - Mahjabin Reza Chowdhury and Md Assaduzzaman; writer Naseef Amin; and artistes of the web series Neville Ferdous Hasan, Aupee Karim, Sharmin Joha Shoshi, Shariful Islam Shamim, and Mostafa Monwar among others were  present at the press conference.

Dhaka Metro will be streaming on hoichoi from April11, produced by Amitabh Reza Chowdhury’s Half Stop Down.

Director Amitabh Reza commented, “The web series is a completely new horizon for our media industry, and I enjoyed working on it. I am confident everyone will appreciate the hard work we put into making the series. The show is a dark-comedy and a thriller which will give a unique experience to the Bengali audience.”

Hoichoi Bangladesh Lead Sakib R Khan, said, “Dhaka Metro is our first attempt to take Bangladesh produced content to the global audience. hoichoi is also coming up with more content production in Bangladesh which will soon stream on the app”.

This is the first time hoichoi is working with Amitabh Reza, actor Aupee Karim, Neville Ferdous Hasan to present the story of a man trying to break free of his monotonous urban lifestyle and rediscover himself.