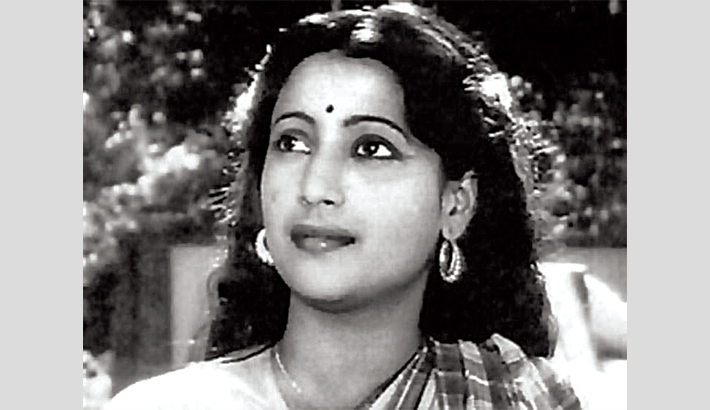 The iconic Bengali actress Suchitra Sen was remembered on her 89th birth anniversary on Saturday.

To mark the day in a befitting manner, different socio-cultural organisations held elaborate programmes in Bangladesh and West Bengal.

Besides, the satellite television channels and radio station of the country aired an array of special programmes all along the day.

Legendary actress of Bangla filmdom Suchitra Sen was born in Pabna on April 6, 1931. She was a versatile actress of Indian cinema who had a highly successful and decorated career spanning more than two and a half decades from the early 1950s to late 1970s.

Her unforgettable performances in a series of popular Bengali films such as ‘Sharey Chuattor’, ‘Deep Jwele Jaai’, ‘Uttar Falguni’, ‘Saat Paake Bandha’ and ‘Pathe Holo Deri’, among others, made her a legend in Bengali cinema and a household name.

She set such a high benchmark for Bengali cinema which inarguably has been difficult to attain even till this day.

Suchitra made her debut in film with ‘Shesh Kothay’ in 1952. But it was never released. The following year saw her work opposite Uttam Kumar, another legend of Bengali film, in ‘Sharey Chuattor’, a film by Nirmal Dey.

’Sharey Chuattor’ was a box-office hit and remembered for launching Uttam-Suchitra as a leading pair. The pair went on to become the icons for Bengali cinemas for more than 20 years, becoming almost a genre to themselves.

Suchitra is the first Bengali actress to be awarded at an international film festival at the Moscow Film festival in 1963 - as best actress for her role in ‘Saat Paake Badha’. She was awarded the Padma Shri in 1972 by the Indian govt.

The legend was conferred on West Bengal government‘s highest award ‘Banga Bibhushan’ for her lifetime contribution to Bengali cinema in 2012.

Suchitra Sen passed away in Kolkata of a heart attack early in the morning on 17 January, 2014 at the age of 82.