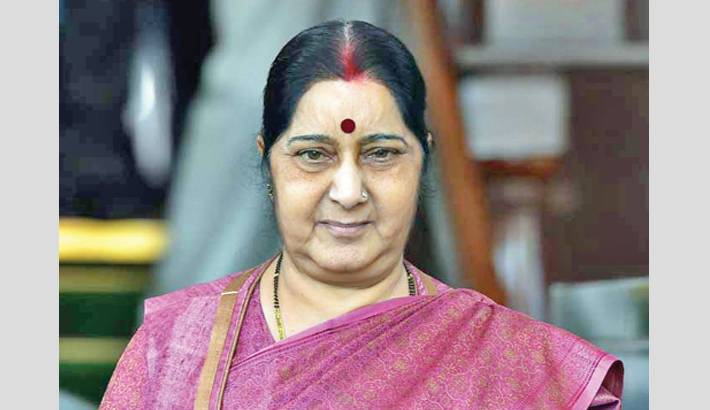 Her rebuke on Twitter came a day after the Congress president slammed the BJP and PM Modi over denial of ticket to veteran leader LK Advani in Gujarat’s Gandhinagar, the parliamentary seat he won six times.

“BJP talks of Hinduism. In Hinduism, the guru is supreme. It talks of guru-shishya tradition. Who is Modi’s guru? Advani. Modi just kicked Advani out,” Mr Gandhi had said.

Ms Swaraj, in a sharp rebuttal, tweeted: “#Advaniji Rahulji - Advani ji is our father figure. Your words have hurt us deeply. Please try to maintain some decorum of your speech. (sic)”

BJP president Amit Shah replaced LK Advani in Gandhinagar in party’s first list released on March 18 triggering sharp reactions from all quarters. He was among the 10-odd leaders above the age of 75, whom the party dropped this time.

Among the many political rivals who criticised the BJP for the decison was West Bengal Chief Minister and Trinamool Congress Chief Mamata Banerjee. She called it an “insult” to the seasoned leader, who was an ex-deputy chief minister under the Atal Bihari Vajpayee government.LK Advani was reportedly upset about the way he was dropped from party list. “Not getting to be in Lok Sabha is not the issue, but the manner in which the denial was done was disrespectful... No big leader contacted him,” a source had said.

Amid the outpour of reactions, LK Advani broke his silence in a blog titled: “Nation First, Party Next, Self Last”. In the piece, he urged the party to “look back, look ahead and look within” and stressed on “democracy and democratic traditions” within. Prime Minister Narendra Modi later tweeted the blog and said that the veteran leader perfectly summed up the true essence of the party.