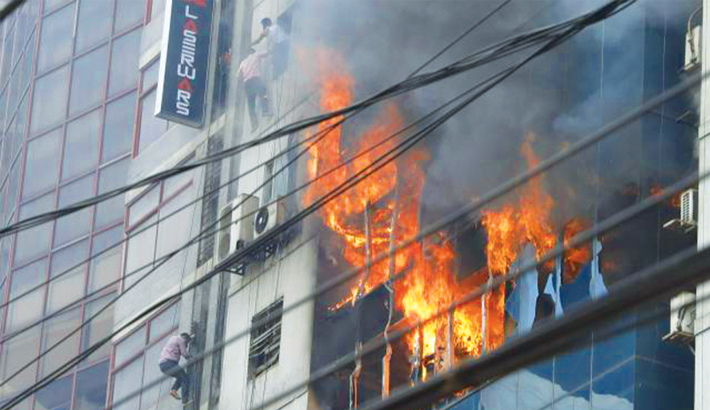 Housing and Works Minister SM Rezaul Karim alleged on 29 March that the FR Tower incident is an act of ‘murder’.  He blamed Rajuk for sanctioning buildings which have constructed illegal floors. Of the FR Tower he said, “Permission was given only for 18-storey, but 22-storey was constructed illegally in 2007 during the Caretaker Government's era”. Many Rajuk officials are controversial for indulging in unscrupulous activities. Dhaka has many illegal constructions. Rajuk is solely responsible for allowing irregularities of greedy owners. Dhaka is a densely populated city. It is really difficult to demolish many illegal buildings. Even if Rajuk takes initiative to abolish unauthorised constructions, many selfish owners bribe Rajuk officials to halt their demolition jobs. At the same time, they disobey the building codes stipulated by Rajuk. In Rajuk's official website, it is mentioned that there should be a stipulated reasonable gap between buildings. Unfortunately, many buildings are in congested proximity. One building's occupants can smell and see what others are cooking in another building. A thief can steal things from one building and escape through the rooftop of adjacent building; this is how many of our buildings are constructed.

In our apartment where we live, there is a fire extinguisher, but we don’t know how to operate it when fire breaks out. None of us received any training about using fire extinguishers. I am sure many of us do not really know how to use them. After the Chawkbazaar fire, I watched some videos on how to use a fire extinguisher. I have some ideas on it now. Without any required training session, I may struggle to take any initiative if fire strikes. We are not prepared for any disaster. The knowledge of proper use of fire extinguishers can save many lives! Unfortunately, many buildings do not have fire extinguishers! Before blaming anyone else, I should berate myself for not raising more awareness. I am hoping to share my concerns with our apartment owners' association. We need some proper coaching from experts.

Prime Minister Sheikh Hasina rightly calls upon intelligent services to probe into the matter. Our prime minister alone cannot change the country. We need cooperation from all corners. Our population problem is such that people do not have enough space to live comfortably or roam around in major cities. Still, they come to cities in flocks. There is something about cities that does not encourage people from villages where they have less employment opportunities but more opportunities to intervene in others personal matters. The village atmosphere is mostly toxic. There are sufficient employment opportunities in villages. People there have no scarcity of foods. The subalterns shift to cities for more money and better education for their children. Food is not their main reason for changing locations. The lack of liquid money encourages subalterns for domestic migration. The lack of modern amenities and shops where one can use credit cards deters city folks from living there.

We should not turn deaf ears to PM's plea for living honestly. When disasters strike, we talk about it for some days. Then, we forget about it with the passage of time. It is human nature!  For two weeks after an incident, we take precautions and drastic measures.  Subsequently, we become nonchalant about it. Problem is in our bone marrow. We have a lackadaisical attitude.

Unfortunately, the recent tragedy has killed 25 people so far. It is a pity to see people being killed. Live videos have exacerbated our pain. One can blame the swaying masses! We should not. People will always be curious. Even if a place is cordoned off, we cannot disperse the crowd. In some countries, governments use hot water and rubber bullets to disperse large gathering of people. Our law enforcement agencies did not shoo people away. They made the right decision. Otherwise, we would have got more fatalities. People could have trampled over one another.

I don't want to blame any government, past and present. I want to blame our mentality. We don't change ourselves. We don't follow rules and regulations. One of the basic precepts of religion is honesty. Look how dishonest we are! When money is swimming in front of us, we jump to grab that money in whatever way possible.

Damage has already been done. Now, we need to go for damage limitation. Hopefully, corrupt officials will stop doing corruption. Restaurant owners will be more careful while using fire. We should never take fire for granted. Flames burn bright. They kill people before they are doused. More importantly, we must turn our stove off when we go out. Cylinder gas is used in villages also. Many of them don't have gas services. Our government must ensure gas services to all. The citizens should check whether there are leaks or not. Let us prevent further murders from being committed by either us or any of our fellow human beings.