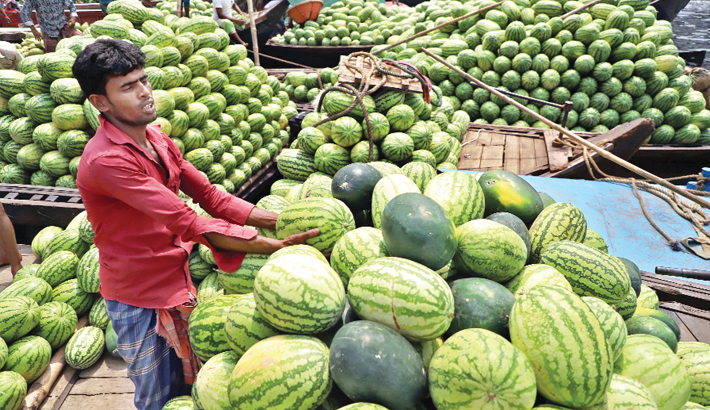 A huge quantity of watermelons has been brought to the capital from different districts by boat for sale. The juicy fruit is in high demand in the summer. The photo was taken at Wise Ghat in the capital on Friday. —sun Photo

The succulent summer fruit watermelon has appeared in different markets across the capital while its price remains beyond the reach of low-income group.

Being one of the most popular fruits during the sunny summer in the tropical country including Bangladesh, watermelon consumption gives everyone a relief of sweltering heat.

Full of health benefits, watermelons are now turning to be a preferred ingredient for restaurants, five-star hotels, and are used in salads paired with cheese and other ingredients.

Watermelons first originated several thousand years ago in Africa in the Kalahari Desert, and overtime made its way to all over the world like Europe, Asia and North America where it is cultivated.

Watermelon is packed with healthful nutrients – vitamins and minerals. They are a good source of antioxidants like vitamin A, vitamin C, vitamin B6, and potassium, magnesium, and dietary fiber.

Lucrative price encourages farmers to cultivate the summer fruit in the tropical weather while the country has seen a bumper watermelon yield in the last three constructive years.

But the consumers with the fixed income are not benefiting from the abundance of the summer fruit as the prices remain beyond their reach.

Middlemen are being blamed for the exorbitant prices of the fruit in the retail market.

Despite the ample supply, the consumers are not getting the benefits of bumper harvest as the retailers are putting much higher price tags.

Meanwhile, watermelon was selling at Tk 40-55 per kg at different super shops in the capital.

Mehedi Masood, project director of Year Round fruit Production and Nutrition Improvement Project of the DAE, said the production of watermelon has increased in the last couple of years and a different variety of watermelons are being cultivated in country.