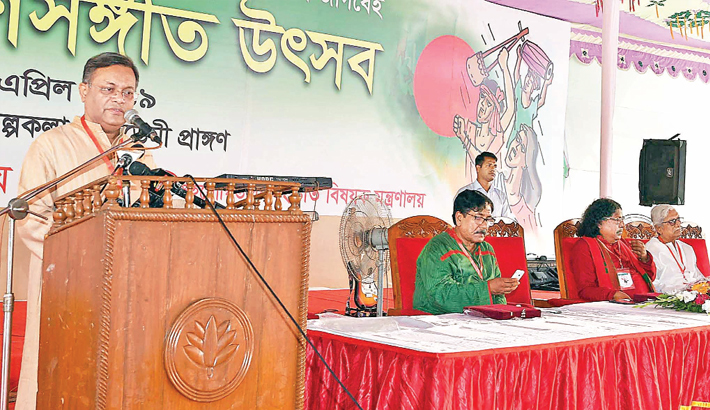 Information Minister Dr Hasan Mahmud speaks at the inaugural ceremony of the Jatiya Gonosangeet Festival-2019 on the premises of Bangladesh Shilpakala Academy (BSA) in the capital on Friday.

“The role of Gonosangeet in different struggles will be written in golden letters…. Gonosangeet motivated the Bangali nation to join the independent struggle and it should be projected to new generation,” he told the inaugural function of Jatiya Gonosangeet Festival-2019 on the premises of Bangladesh Shilpakala Academy (BSA).

Dr Hasan said alongside the capital Dhaka, Gonosangeet festivals should be held in different divisional cities aiming to encourage the people to join nation building activities.

The minister urged the Bangladesh Gonosangeet Samannay Parishad to play its role like the past to develop a sense of patriotism among the people for building ‘Sonar Bangla” as dreamt by the Father of the Nation Bangabandhu Sheikh Mujibur Rahman.

He urged BNP leaders not to do politics over treatment of Begum Zia.