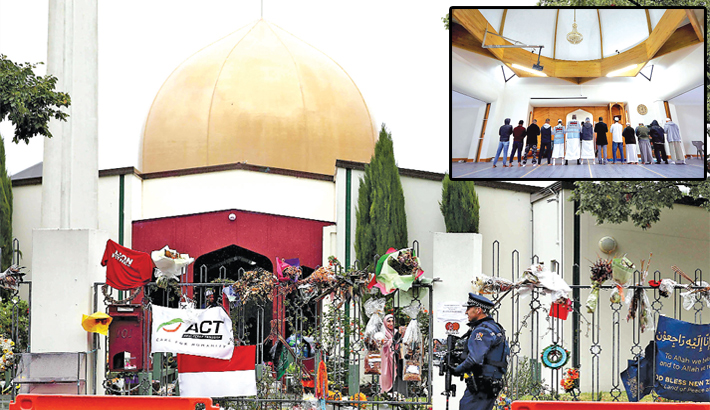 An armed police officer (R) stands guard outside the Al Noor mosque, one of the mosques where some 50 people were killed by a self-avowed white supremacist gunman on March 15, at Christchurch in New Zealand on Friday. Inset, members of the Muslim Community offer prayers inside the mosque. —AFP PHOTO

CHRISTCHURCH: The man accused of shooting dead 50 Muslim worshippers in a Christchurch mosque sat impassively Friday as a New Zealand judge ordered him to undergo tests to determine if he is mentally fit to stand trial for murder, reports AFP.

Survivors and relatives of those killed in the March 15 attacks packed into a Christchurch courtroom as alleged gunman Brenton Tarrant appeared via audio-visual link from a maximum-security prison in Auckland.

The 28-year-old Australian faces 50 murder and 39 attempted murder charges over the shootings at two mosques, which shocked the world and rattled normally peaceful New Zealand.

High Court judge Cameron Mander ruled during the brief hearing that Tarrant would be examined by two health assessors to determine “whether he is fit to stand trial or insane”.

The suspect—a self-avowed white supremacist—sat motionless throughout the hearing, listening intently to proceedings.

He was not required to enter a plea and was remanded in custody until his next court appearance on June 14.