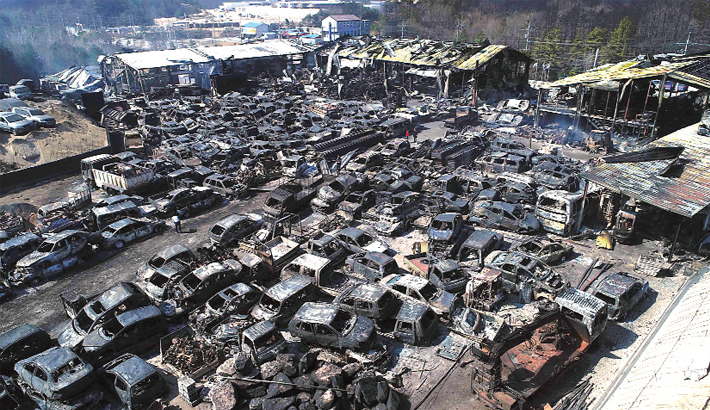 Scrapped vehicles burnt by a forest fire are seen at an auto junkyard in Sokcho on Friday. A giant forest fire swept across swathes of South Korea on the day, as authorities declared a rare national emergency, deploying 900 fire engines and tens of thousands of personnel to bring it under control. —AFP PHOTO

SEOUL: A giant forest fire swept across swathes of South Korea Friday, as authorities declared a rare national disaster, deploying 900 fire engines and tens of thousands of personnel to bring it under control, reports AFP.

Apocalyptic images on television and social media showed walls of flame lighting up the night, buildings ablaze, and clouds of smoke billowing across hillsides during the day.

The fire broke out late Thursday alongside a road in the town of Goseong, in the far northeast of the country and only around 45 kilometres (28 miles) from the border with the nuclear-armed North.

Fanned by strong winds it quickly spread through the mountainous area, incinerating 400 homes and 500 hectares of land, according to the government.

Nearly 4,200 people were evacuated and one person died, authorities said, while 35 were injured.

South Korean President Moon Jae-in visited the areas in Gangwon province most affected by the blaze, meeting with residents who were forced to leave their homes. Moon and his staff wore yellow jackets, which symbolise situations of national emergency.

The president’s approval rating hit a record low of 41 percent Friday over concerns about the economy.

He visited an elementary school in Goseong where evacuees were staying, and Jangcheon village, where many residential houses are reported to have burnt down.

“I hope you take extra care of displaced victims who—after having lost their homes in an instant—may now find time to catch their breath,” Moon told fire officials.

The National Fire Agency said more than 870 fire engines and some 10,000 emergency personnel were dispatched to fight the blaze. The military sent 32 helicopters, along with fire engines of its own and 16,500 soldiers, to help.

“Fortunately, the main fire has been brought under control,” provincial governor Choi Moon-soon said in a radio interview with TV channel YTN, but added that others were still burning.