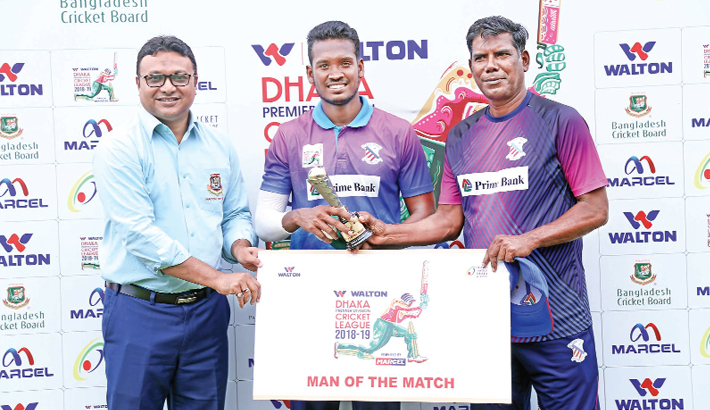 Mohammedan seemed to have won the game with ease after piling up 324 before being all out in 49.3 overs. Shinepukur however stayed upbeat and finally gunned down the total with just two ball to spare, making 325-8.

Surprisingly no one could from either side hit century in a game where 649 runs were scored. Shinepukur’s Afif Hossain was the highest scorer in the game with 86 ball-97, smashing four fours and five sixes, an innings that led Shinepukur’s stunning victory.

In pursuit of big chase, Shinepkur lost two openers-Shadman Islam (21) and Sabbir Hossain (17) with the scoreboard reading 43. Unmukt Chand first made the genuine resistance, hitting a 51 ball-49 after which Afif took the onus.

While Afif kept the asking run-rate under control, there were significant contributions from the lower order batsman No 8 Amite Hasan made 43, No 9 Sohrawardid Shuvo and No 10 Delwar Hossain scored identical 34 to help the side gun down such a big total.

Put into bat first, four batsmen of Mohammedan scored half-century to help the side put up a big total which looked enough to win the game.

Opener Liton Das struck 84, his fellow opener Irfan Shukkor contributed 50 as they shared 101 for the opening stand to give the side a solid start. Avishek Mitra also made 50 while Raqibul Hasan blasted a whirlwind 48 ball-74 with 11 fours and a six. Sohag Gazo hammered 22 ball-45 with three fours and as many sixes.

Batting first, Prime Bank scored 222 runs on board in 50-over losing eight wickets.

In reply, BKSP were bundled-out in only 50 runs. Al Amin Hossain, who is not with the national set-up currently, bagged five wickets conceding only 20 runs.

Al Amin was awarded the man of the match for his splendid performance with the ball. Prime Bank Cricket Club confirmed their spot in super league after Abahani Ltd and Legends of Rupganj.

In the other match, Gazi Group Cricketers defeated Brothers Union by 9 runs at Bangladesh Krira Shikkha Protisthan Ground-4 in Savar on Friday.

Brothers won the toss and decided to bowl first. Gazi Group were all out 206 in 49.4 Overs where Kamran Ghulam scored the highest 81 runs for the team.

They lost the last eight wickets in 61 runs and subsequently lost the game. They needed 21 from the last 24 balls but were all-out for 197 in 48.5 overs.