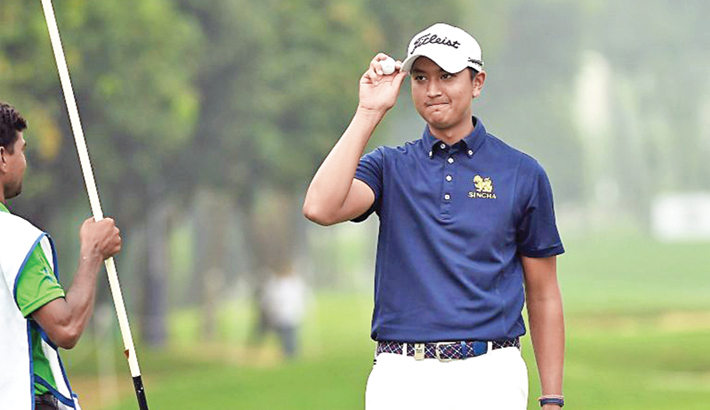 Thailand golfer Sadom Kaewkanjana is seen in jolly mood during the third day of Bangabandhu Cup Golf Open at Kurmitola Golf Club in the capital on Friday. — Sun Photo

Thailand golfer Sadom Kaewkanjana is on the verge of claiming his first Asian Tour breakthrough after signing for a three-under-par 68 as he took a took a two-shot lead heading into the final round of Bangabandhu Cup Golf Open at Kurmitola Golf Club in the capital on Friday.

Siddikur Rahman remained the highest-placed Bangladeshi after posting a flawless 68 to tie in fourth place with Australia’s Maverick Antcliff (69) on 202. Last year’s joint runner-up Jack Harrison of England settled a further shot back in sixth following a 68.

Siddikur Rahman marked the best ever result produced by a Bangladeshi at the 2017 Bangladesh Open. He birdied the 18th hole to close with a five-under-par 66 and a 13-under-par 271 total, finishing four shots shy of winner Jazz to take second place on his own.

Siddikur became the first player from Bangladesh to win on the Asian Tour when he emerged victorious at the Brunei Open in 2010. Also became the first sportsman from his country to qualify for the 2016 Olympics on merit and was accorded the honour of becoming Bangladesh’s flagbearer during the opening ceremony in Rio de Janeiro.

The 20-year-old Sadom, who is making his first start on Tour after coming through the Qualifying School last December, marked his card with four birdies against a bogey to stay atop the leaderboard with an 18-under-par 195 total at the Kurmitola Golf Club.

Sadom’s overnight three-shot lead was reduced to two by his closest rival Rashid Khan of India, who narrowed the gap after carding a bogey-free 67, highlighted by an eagle and two birdies, to sit in second place at the US$350,000 Asian Tour full-field event.

India’s Ajeetesh Sandhu returned with the day’s best score of a 65, thanks to six birdies, including four in-a-row from the 11th hole, to trail by six shots in solo third in the tournament, which is celebrating its fifth consecutive edition on the Asian Tour this week.

Sadom, who has already broken through on the Asian Development Tour (ADT) last month, is chasing to become the third Thai player following Thitiphun Chuayprakong (2016) and Jazz Janewattananond (2017) to win the National Open of Bangladesh.

Should he accomplish the feat on Sunday, he would also become the record fastest Qualifying School graduate to win on the Asian Tour.

The Bangabandhu Cup Golf Open 2019 welcomed a new title sponsor in the National Bank Ltd, a public limited bank in Bangladesh. The tournament has been named in honour of the father of the nation of Bangladesh, Bangabandhu Sheikh Mujibur Rahman.