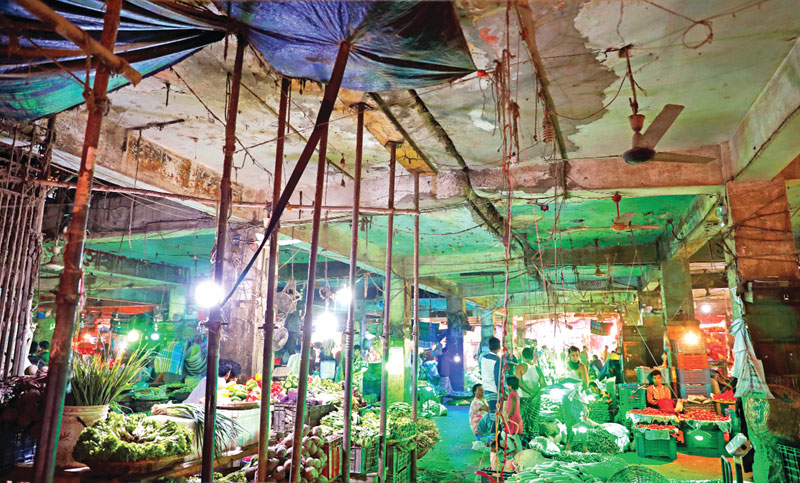 The building that houses the Karwan Bazar kitchen market in the capital lies in a dilapidated condition, posing a threat of serious accident. The photo was taken on Thursday. — Reaz Ahmed Sumon

Traders are facing a high risk of life while running their businesses at the wholesale kitchen market under a dilapidated building in Karwan Bazar of the capital.

Many fear that a terrible disaster may take place at the market any time if the building collapses.

Several traders alleged that a large number of electric lines have remained snapped overhead in and around the market, posing a threat to safety of the people there.

They said people sometimes come in contact with live electric wires when they move under the risky power supply lines.

Shoppers are also concerned over the unplanned power supply lines, they added.

“The authorities concerned are taking no steps to resolve the problem,” a trader said, wishing anonymity.

While talking to the daily sun correspondent, traders and shoppers demanded that the government reconstructs the building immediately to avoid disaster.

Sources said the market is in the process of relocation to new places for 13 years.

“But the places are yet to be ready for the market for the double-standard of shopkeepers, traders and their leaders,” one source said.

An official at Dhaka North City Corporation said there was a plan to relocate the market to Sayedabad, Aminbazar and Mohakhali in phases.

The authorities concerned could not shift the market in the face of opposition from traders and their leaders, DNCC chief revenue officer Abdul Hamid Miah said.

The DNCC official said, “We’re trying to convince shopkeepers and wholesalers to go to the new places. But they’ve placed some demands, especially for a business-friendly environment.”

“If they aren’t convinced, we have to apply force to move them out from the market,” he added.

Sources said the project deadline expired long ago, but its director Arifur Rahman did not hand over the market buildings to the DNCC Estate Department.

The work of the new markets is yet to be finished. Moreover, more changes will be brought to the market infrastructures, DNCC chief estate officer Aminul said.

Arifur Rahman could not be contacted despite a repeated attempt over phone.

When asked, DNCC Mayor Atiqul Islam said, “We know the market is posing serious risk to lives as the building is very old. We’re trying to relocate the market to three places of the capital.”