Mahmudullah hopes to recover before WC 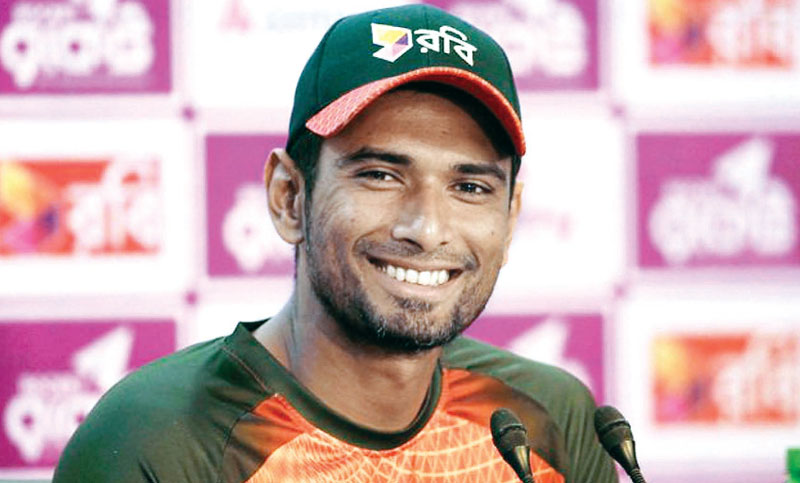 Bangladesh all-rounder Mahmudullah is confident that he will recover from his shoulder injury just in time to make sure that he is available for the upcoming World Cup.

The news of Mahmudullah’s grade-three tear came as a severe shock for Bangladesh considering he is expected to be one of the major contributors for Tigers in the global tournament as he has a special liking for ICC events.

Bangladesh would be looking forward to have Mahmudullah at his best because of the fact that he is one of the most consistent performers in the last World Cup where he hit two centuries while he also scored a century in the ICC Champions Trophy.

Mahmudullah was initially in a state of shock after learning that he had grade-three tear on his shoulder but with passing days it seemed he is getting back into his own groove.

“When the reports came and I first heard that it was a grade-three tear, I was honestly scared,” said Mahmudullah adding that at the moment it does not feel that bad.

“I started rehabilitation three days ago and at the moment it’s getting better,” said Mahmudullah.

“I am much relieved after talking with BCB physicians as they said that many of the players are playing despite having this injury,” he added.

The plus point for me is that I am not facing any problems in my batting because of this injury,’’ said Mahmudullah though he is yet to get same kind comfort during his bowling and fielding.

“If I am able to start throwing and bowling then everything is good,” he said.

“I was feeling some stiffness in my shoulder for the past four months but as we had back to back games I couldn’t give much thought to that,” said Mahmudullah.

“During the third ODI in New Zealand, I dived full length while fielding and I think the injury became worse after that. The pain gradually increased during the first Test and I could bowl only one over. After doing the scans I came to know that it was serious,” he said.

Mahmudullah’s injury turned out to be a major topic in country’s cricket arena after it was learnt that he might need an operation if Bangladesh Cricket Board (BCB) fails to address his injury by following conservative treatment along with his rehabilitation.

According to BCB officials this injury is quite similar to the one that Mustafizur Rahman received in 2016 which forced him to be out of competitive cricket for six months as he had to undergo a surgery for his SLAP (Superior Labrum from Anterior to Posterior) tear and was later ruled out for next six months.

Whether a similar fate awaits Mahmudullah can only be said in the course of time but for the time being he looks to be assured that it won’t be a big issue considering he is not a pace bowler unlike Mustafizur or Rubel Hossain, who also went under the knife for a similar shoulder injury.

“The reason for the talks of surgery came because Mehedi (Hasan Miraz), Rubel (Hossain) and Mustafizur (Rahman) faced the same problem,” said Mahmudullah.

“Rubel and Mustafizur are fast bowlers and the shoulder is a big factor for them so they decided to undergo surgery at the initial stage,” he said.

“I realised after talking to the physios that as I am mainly a batsman and an-off spinner it won’t be a huge issue for me,” he said.

Mahmudullah said that preparation will be the key before the World Cup and the tri-nation series in Ireland is expected to help them ahead of the biggest cricket carnival.

“Preparation is very important. If you talk about the previous World Cups and the Champions Trophy, tournaments we had good preparations. In 2015 we had a camp in Australia which helped us a lot to get used to the wickets,” said Mahmudullah.

“We did something similar in England ahead of the Champions Trophy,” he said.

“We are going to Ireland and we will also have a camp in England before the World Cup and it will be very crucial for us as that will help us have a chance of playing in condition that will be similar to England (where World Cup will be played),” said Mahmudullah.

“I think each individual has their own way of preparing and one should know what type of preparation suits him,” he said.

“I am working on my fitness at the moment as well as batting and bowling gradually,” he concluded.