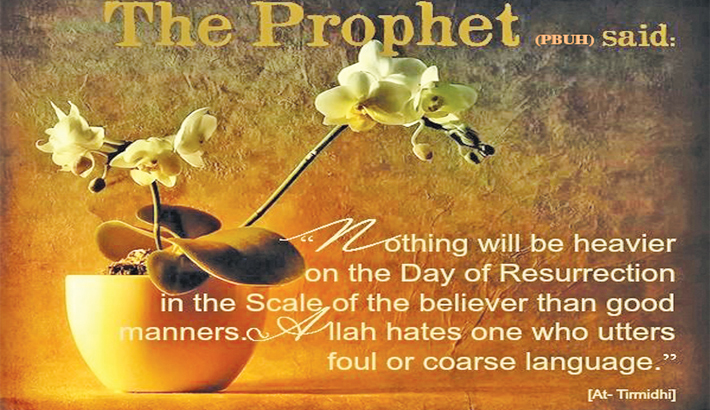 Islamic tradition has its own manners and etiquettes which are the best as compared to any other tradition in the history of the world. This is because Islam is a complete and comprehensive religion which is indeed an acceptable religion byAllah. (See: Surah Ma’idah, 5: 3 and Surah al-Ali ‘Imran, 3: 19). Here are few of them which should be practiced in our practical lives.

Whatever the work easy or hard, it is Sunnah to start it with saying ‘Bismillaah’ (In the name of Allah). Because, there is a Hadith narrated by Abu Hurayra (Ra) that mentions the Prophet said “Any significant act that does not begin ‘in the name of Allah’ is severed.” (Sunan Ahmad, Vol. 14, Hadith No. 329). Moreover, there are some Hadiths that recommend us to say “bismillahir Rahmanir Rahim” before some specific works. For example, it is narrated that 'Umar bin Abi Salama (Ra) said that I was a boy under the care of Allah's apostle (pbuh) and my hand used to go around the dish while I was eating. So, the Allah's apostle (Ra) said to me, “O boy! Mention the Name of Allah and eat with your right hand, and eat of the dish what is nearer to you." Since then I have applied those instructions when eating.” (Sahih Bukhaari, Hadith No. 288).

Whenever we Muslims meet each other, we should greet by saying “Assalamualikum wa rahmatullah (peace be upon you).” Our Prophet Muhammad (pbuh) said, “Allah created Adam, making him 60 cubits tall. When He created him, He said to him, ‘Go and greet that group of angels, and listen to their reply, for it will be your greeting (salutation) and the greeting (salutations) of your offspring.’ So, Adam said (to the angels), 'As-Salamu ‘Alaikum' (i.e. Peace be upon you). The angels said, 'As-salamu Alaika wa Rahmatu-l-lahi' (i.e. Peace and Allah's Mercy be upon you). Thus, the angels added to Adam's salutation the expression, 'Wa Rahmatu-l-lahi,' Any person who will enter Paradise will resemble Adam (in appearance and figure). People have been decreasing in stature since Adam's creation.” (Sahih Muslim, Hadith No: 543).

Muslims should always eat and drink with their right hands only if there is no good reason. Allah's Messenger (pbuh) said that “When any one of you intends to eat (meal), he should eat with his right hand. and when he (intends) to drink he should drink with his right hand, for the Satan eats with his left hand and drinks with his left hand.”(Sahih Muslim, Hadith No. 5008). It is also Sunnah to say “Alhamdu lillaahi hamdan kathiran tayyiban mubaarakan fihi, ghayra makfiyyin wa la muwadda'in, wa la mustaghnan 'anhu Rabbanaa.” (All praise is to Allah, praise in abundance, good and blessed. It cannot be compensated for, nor can it be left, nor can it be done without, our Lord). (Sahih Bukhari, Hadith No.: 368). In short, we can at least say “Alhamdu lillah" (all praise is to Allah).

When someone sneezes, he/she should praise Allah (swt.) by saying ‘Alhamdulillah’ (Praise be to Allah). If you here anyone’s sneezing and praising Allah, you should reply by saying ‘Yarhamukallaah’ (May Allah bestow His mercy on you). If someone says this to you, you should reply, “Yahdikumullaahu” (May Allah gives you guidance). It was narrated from Abu Hurayrah (Ra) that the Prophet (pbuh) said, “If anyone of you sneezes, he should say 'Al-Hamdulillah, and his (Muslim) brother should say to him, “Yarhamukallah”. When the latter says “Yarhamukallah", the former should say, 'Yahdikumullah”. (Sahih Bukhari, Hadith No. 243).

This is very natural that people love to be praised. One who does good for other, if he/she is praised, he/she would be more interested in doing so in future. It should be said immediately “Jazaka Allahu Khayran (May Allah reward you the best)” instead of saying “Thank you”. In Islamic manner, he/she should also be kept in our prayers. It was narrated that Usamah ibn Zayd (Ra) said, The Messenger of Allah (pbuh) said, 'Whoever has a favour done for him and says to the one who did it, ‘Jazak Allaahu khayran,’ has done enough to thank him.” (Sunan at-Tirmidhi, Hadith No.: 1958).

May Allah bless us to lead our life on the right way according to the Qur’an and Sunnah!