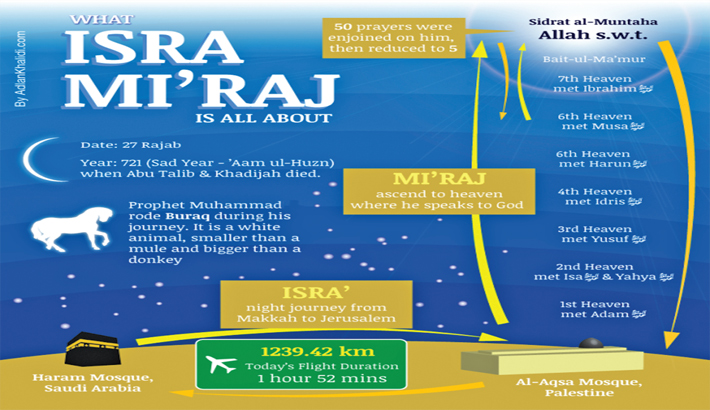 In another place of the Holy Qur'an, Allah (SWT) says:“And he (Muhammad) saw him (Jibrail) at a second descent. Near Sidratul Muntaha (a lote-tree of the utmost boundary over the seventh heaven beyond which none can pass). Near it is the Paradise of abode. When that covered the lote-tree which did cover it. The sight of Muhammad turned not aside (right or left) nor it transgressed the limit. Indeed, he (Muhammad) saw the greatest signs of his Lord." ( Sura An-Nazm: Ayat 13-18).

According to a Hadith a short description of Mi‘raj is: Hazrat Muhammad (pbuh) was asleep at the house of Umme Hani on that night. At the last part of the night, the angel Hazrat Jibrail (AS) came accompanied with Hazrat Mikail (AS), awakened him and mounted him on a winged beast called ‘Burak’ and took him to Hatim near the yard of Ka‘ba. They brought out the Qalb of the Prophet (pbuh) from his body, washed it well and then kept it in its place again. They also set Mohar-i-Nubuwat in the body of the Prophet (pbuh). Then they took Muhammad (pbuh) to Al-Masjidul Aqsa at Jerusalem. Al-Masjidul Aqsa is known as Baitul Muqaddas. In Al-Masjidul Aqsa, Muhammad (pbuh) led all the Prophets in salat. Then Hazrat Jibrail (AS) took Muhammad (pbuh) up through the seven Heavens, introducing him to the angels and the Prophets, and then to Paradise and Hell. Finally, Muhammad (pbuh) went alone into the presence of Allah (SWT) riding on ‘Rafraf’. He saw Allah (SWT) and spoke with Him. In Sura An-Najm Allah (SWT) mentioned, “Then he approached and came closer. And was at a distance of two bows’ length or even nearer. So Allah revealed to His slave (Muhammad) whatever He revealed." (Sura Najm : Ayat 8-10).

In the light of these ayats, Hazrat Abdullah Ibn Abbas (Ra) said that these ayats proves that Hazrat Muhammad (pbuh) saw Allah and spoke with Him. In Mi‘raj Allah (SWT) gifted Muhammad (pbuh) three special gifts. 1. Five times salat in a day; 2. Last three ayats of Sura Al-Baqara; 3. Promise of forgiving those who do not commit shirk.

Mi‘raj is very significant in Muslims’ life. It gives the idea of faith, spirituality and practice (amal) in our lives. It also gives the idea of ladder between Allah and His servants. So, it is said, “Salat is the Mi‘raj for the believers”.

In some countries of the world the 27th night of the month of Rajab is observed as Lailatul Mi‘raj or Shab-i-Mi‘raj. Some Muslims celebrate it by fasting on the 27th of Rajab and spending that night in nafl ibadats. It is not correct, rather it is bid‘at (innovation). Because the Messenger of Allah (pbuh) and his companions (Ra) did not tell anything about the date of Mi‘raj and they did not celebrate it.

Mi‘raj is a divine miracle (mujeza) of our great Prophet (pbuh). We must believe in it like Hazrat Abu Bakr (Ra).

The writer is an Assistant Professor of Rajuk Uttara Model College, Dhaka.