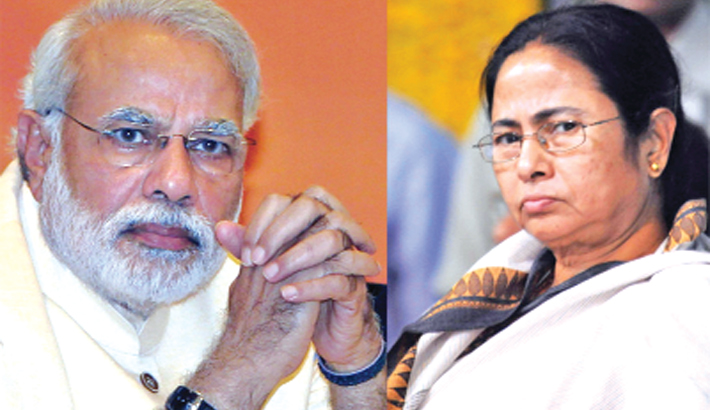 Siliguri: Alleging that Bengal chief minister Mamata Banerjee created obstacles impeding the speedy development that he delivered in other states, Prime Minister Narendra Modi on Wednesday described her as “speed breaker Didi” and urged the people to remove the hindrance from the way, reports Hindustan Times.

“I have not been able to deliver development in Bengal at the pace that I have achieved in other states. This state has a speed breaker which is known as Didi,” remarked Modi.

Incidentally, assembly elections will be held in Bengal in 2021 and BJP leaders have been saying in public rallies that the 2019 Lok Sabha (LS) polls will mark the beginning of the end for Trinamool Congress rule.

Modi alleged she (Didi) does not care about the poor. “If poverty is removed, her politics will end. The same is true for the CPI(M),” remarked the Prime Minister.

The BJP leader also stung Trinamool Congress leaders on the ponzi scams, alleging that they ran away with the money deposited in the schemes.

In a veiled threat apparently meant for state officials, Modi said, “Those who are on the payroll of the TMC and are often found spreading terror, will soon be taken to task.”

Meanwhile, West Bengal Chief Minister Mamata Banerjee Wednesday attacked Prime Minister Narendra Modi describing him as “expiry Babu”, and strongly contested his allegations against her as being a ‘speedbreaker’ in the path of state’s development.

Claiming that her government in West Bengal has done a lot for the welfare of the people of the state, Banerjee told a public rally here in Cooch Behar district that income of farmers in Bengal has increased three times under her rule.

Mocking Prime Minister Modi as “Expiry Babu” and “Expiry PM”, Banerjee dared him to participate in a direct debate with her in television or at a public rally.

“I am not Modi, I don’t tell lies,” she said, alleging that the PM has made false claims about performance of the TMC government in West Bengal.

She claimed that 12,000 farmers committed suicide during Modi rule in the country. The TMC supremo strong riposte came after Prime Minister Narendra Modi made scathing attack at her at BJP rally at Siliguri and later at Kolkata.