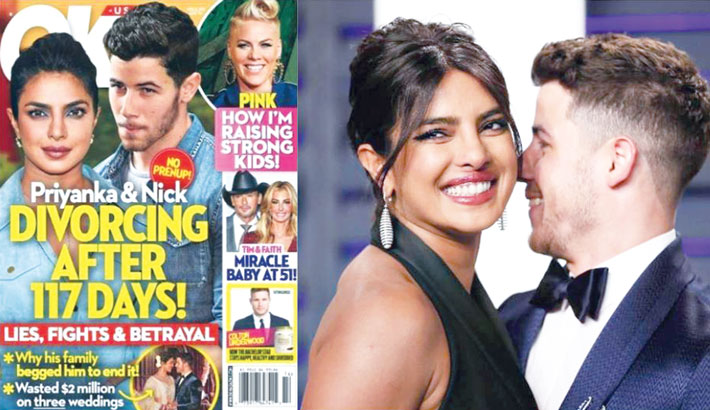 Actor Priyanka Chopra and her singer husband Nick Jonas are not headed towards divorce and will reportedly sue OK! magazine for publishing a slanderous article against the couple.

According to a report in In.com, a source close to Priyanka said that she will ‘let loose’ her legal team on the magazine for alleging that the couple are headed towards a divorce just ‘117 days’ after getting married. Gossipcop.com contacted Priyanka’s rep, who told the website that the story is ‘nonsense’.

Priyanka’s close associate told In.com, “Once she makes up her mind to deal with negative rumour-mongering, nothing can stop her. Piyanka will let loose her legal team on this news-manufacturing tabloid and ensure they get to their knees.” Another friend of Priyanka said that they are still very much in love. “I met them both last week. The vibes between Priyanka and Nick is so warm no party pooper can piss on her parade. Tabloids and portals that go any lengths to generate news must be told where to get off,” they said.

The OK! magazine article read that the two are quickly falling out of love now that they are “starting to really get to know each other”. “They’ve been fighting about everything -- work, partying, spending time together. The bottom line is that Nick and Priyanka rushed into things...And now they’re paying the price. Their marriage is hanging by a thread,” said a source.

The source is quoted as saying that Nick believed the actor was “cool and easygoing” when they got married. “But recently Nick has seen a controlling side to her. She also has a temper -- that’s something Nick wasn’t aware of until after the wedding celebrations.”