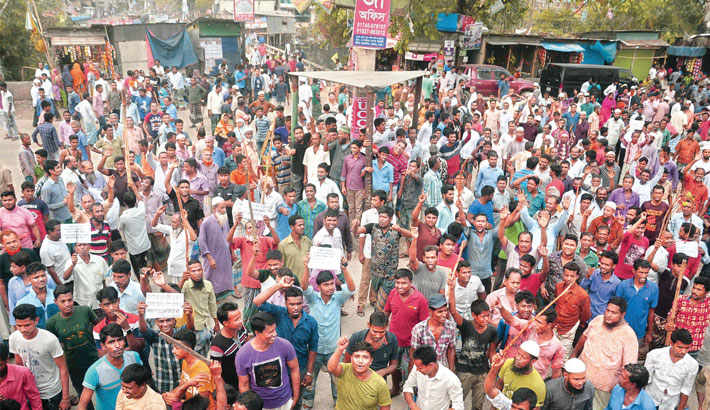 Jute mill workers block Dhaka-Sylhet highway at Demra in the capital on Tuesday to realise their nine-point demand, including formation of a wage commission. – SUN PHOTO

Jute mill workers blockaded roads and rail routes in parts of the country on Tuesday in a 72-hour strike to press for a nine-point demand, including formation of a wage commission.

They blockaded railways in Khulna and Chattogram and roads in Chattogram and Rajshahi from 8:00 am to 12:00 pm. Jute Mill Workers League, the Collective Bargaining Agreement, or CBA, and the non-CBA Association called the strike.

Their demands also include payment of outstanding wages, providing provident fund and gratuity to the retired workers.

Workers from 26 jute mills including the workers of Khulna started the strike on Wednesday morning, halting their work.

On Tuesday, they blockaded the Dhaka-Khulna railway form 8:00 am to 12noon and placed a blockade on Khulna-Jessore highway at Doulatpur and Kashipur.

Manik Chandra Sarkar, station master of Khulna Railway Station, told newsmen that Benapole bound commuter, Dhaka bound Chitra, Rajshahi bound Mohananda and Syedpur bound Rupsha express could not leave the station due to the protest of workers in the morning.

Khulna-based Crescent Jute Mill CBA president Murad Hossain told newsmen that BJMC chairman gave them assurance to implement the Wage Commission recommendations by March 28 but it had not implemented.

In Chattogram, commuters faced immense suffering as workers of state-owned jute mills started enforcing the 72-strike to realise their demands.

Vehicular movement came to a screeching halt and the port city’s rail communications with rest of Bangladesh were suspended.

In Rajshahi, about 1,500 workers of Rajshahi Jute Mill tried to blockade Dhaka-Rajshahi highway for a brief while before withdrawing.