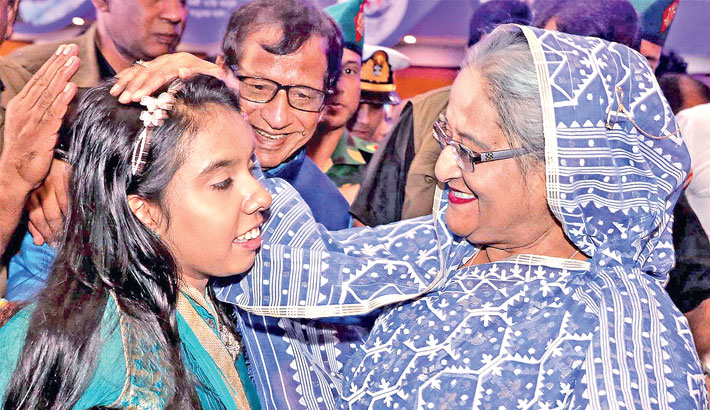 Prime Minister Sheikh Hasina caresses a child with autism at Bangabandhu International Conference Centre in the capital on Tuesday at a programme to mark the 12th World Autism Awareness Day. — BSS Photo

The premier will open the special economic zone through video conferencing from her official Ganabhaban residence in the capital, beginning at 9:00am.

Bashundhara Group Chairman Ahmed Akbar Sobhan and Vice-Chairman Shafiat Sobhan Sanvir will join the inauguration ceremony at Ganabhaban while another Vice-Chairman, Safwan Sobhan Tasvir, will be present at the economic zone.

The Awami League-led government has provided licences to 14 private companies, including Bashundhara Group, for setting up special economic zones in the country to help the industrial sector flourish and draw private investment.

In 2017, the premier during her previous tenure told parliament that her government outlined investment-friendly laws and policies to boost industrial activities and draw private investment.

“The government will continue its support for the private sector as it is one of driving forces of economy. We’re also carrying out various activities to draw foreign investment,” she said.

Sheiikh Hasina said her government has taken steps to set up 100 special economic zones across the country where local and foreign investment will be made.

The premier also said Bangladesh will turn into a hub of Asia’s regional economy by 2041.

“The open economic policy of the present government will open up a new era of success in the areas of trade, commerce and investment at regional, sub-regional and international level,” she said.

“We firmly believe that the size of the country’s economy will stand at 2.5 trillion while per capita income will rise to $12,000 by 2041,” Sheikh Hasina added.