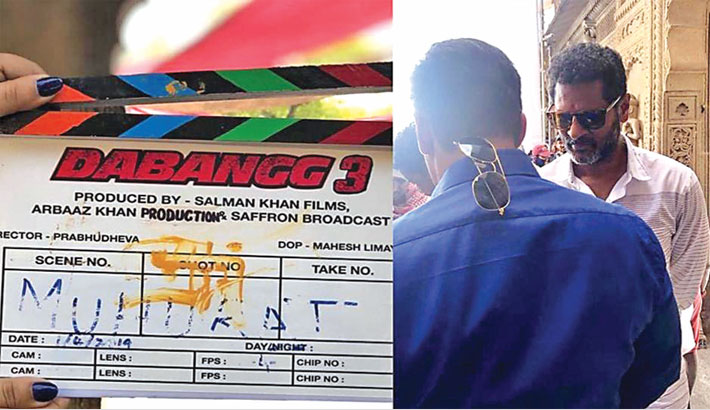 Actor Salman Khan has begun shooting for his next film, Dabangg 3. He flew down to Indore with his brother and the film’s producer Arbaaz Khan and director Prabhudheva on Sunday,reports Hindustan Times. From Indore, the team went to set locations in Mandleshwar and Maheshwar.

The actor shared the first picture from the sets of the film on Twitter and captioned it, “Day1.... #dabangg3 @arbaazkhanofficial @prabhudheva @nikhildwivedi25.” As Salman reprises his character of Chulbul Pandey in the film, he can be seen sporting his aviator sunglasses hanging from the back of his shirt collar in the new picture. Prabhudheva can be seen standing in front of him with the famous Ahilya Fort in the background.

Salman had shared a video along with Arbaaz ahead of the film’s shoot, on Sunday. The actor said in the video, “Arbaaz and me have just landed in Indore where we were both born. Then we are going to Mandleshwar and Maheshwar to shoot for Dabangg where our grandfather was posted when he was in the police force.” Arbaaz added, “That’s right. So we are going to have our first day of shoot tomorrow. Dabangg 3 starts tomorrow!”