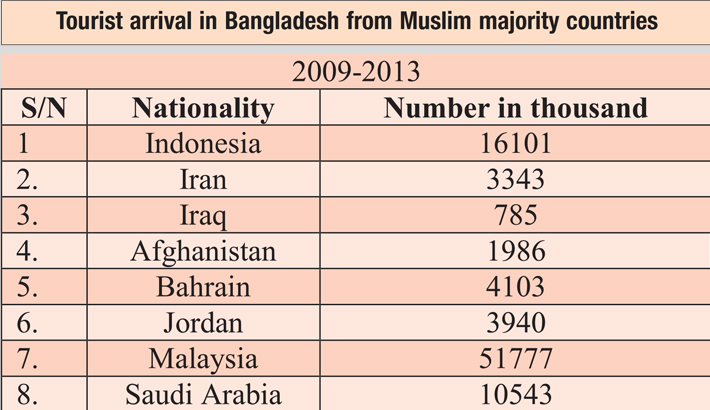 Data of 2013 is up to January – June (06 months) Source: Immigration Authority of Bangladesh

Islam was introduced in Bengal during the period of Rashidun Caliphate in 8th century, mainly by arrivals of Arabs and Persians Muslims and merchants, and later conquests of the region by North Indian Muslim Sultanates. Islam being the predominant component of the national identity, it plays an important role in life and culture of Bangladesh. Though Bangladesh is yet to attract a large volume of international tourists for leisure tourism, it possesses all the potentials to be a pilgrimage tourism destination. The country possesses some landmark Islamic cultural heritages, living and non-living mosques, shrines and wonderful festivals that can attract pilgrimage tourism form Muslim majority and non-Muslim countries of the world. In Bangladesh the Cultural landmarks of antiquity ranges from the 3rd century B.C. to the 19th A.D. At the time of Independence the total number of monuments and sites protected under the Ancient Monument Preservation Act was 80, whereas, the number has now increased to 425, among which 160 are ancient mosques and Muslim heritage of 15th to 19th century (Source: DOA).

Government policy and institutional framework for the promotion of pilgrimage tourism:

To preserve all the valuable Islamic and cultural heritages, Bangladesh has already taken some initiatives. All the archaeological sites have been put under the Department of Archaeology for well preservation and conservation as it has been mentioned earlier. Immediate after the independence of Bangladesh the tourism organisation of Bangladesh,  Bangladesh Parjatan Corporation (BPC) was established by an ordinance in November 1972 to promote tourism in Bangladesh abroad based on all these archaeological and natural heritage sites including the Islamic heritage sites. The government has plans to create tourism facilities at these landmark archaeological sites for the convenient of tourists. The government has recognised tourism as an industry and declared a new National Tourism Policy in 2010. The government has also enacted law for ‘Exclusive Tourist Zone’ and ‘Protection of Tourism Protected Areas’ in 2010. With proper enforcement of these laws, the Islamic and other cultural heritage sites will be well protected. The Industrial Policy of 2009 has included tourism as a thrust sector. Present democratic government is giving priority and importance to the tourism sector within the context of the national economy as well as to develop country's image abroad. Here, it is described how the pilgrimage tourism can enhance a good image of Bangladesh.

During the Bishwa Ijtema, around 5-6 hundred thousand Muslims devotees from India, Pakistan, Indonesia, Maldives, Malaysia, Brunei and other countries come here. After the Ijtema programme, devotees pass some days in Bangladesh and visit some holy places and their tourism activities benefit the local communities in terms of income generation.

Status of pilgrimage tourism in Bangladesh

In Bangladesh, the Islamic heritage sites are always of much regards. The government has plans to conserve all the sites as per the UNESCO code of conduct. UNESCO has designated the 60-domed mosques along with Paharpur Buddhist Monastery and the Sundrbans as world heritage sites. Some other mosques that have already been declared as protected sites and brought in the national heritage list of the government are - Lalabagh Fort Mosque, Sat Gambud Mosque, Sona Masjid (Mosque), Sura Mosque, Tangail Atia Jame Mosque, Gourer Mosque, Binat Bibi Mosque, Shah Suja Mosque of Comilla, Badshahi Mosque of Panchagarh, Kusamba Mosque of Naogaon, etc. (Source: DOA)

The writer is a tourism expert