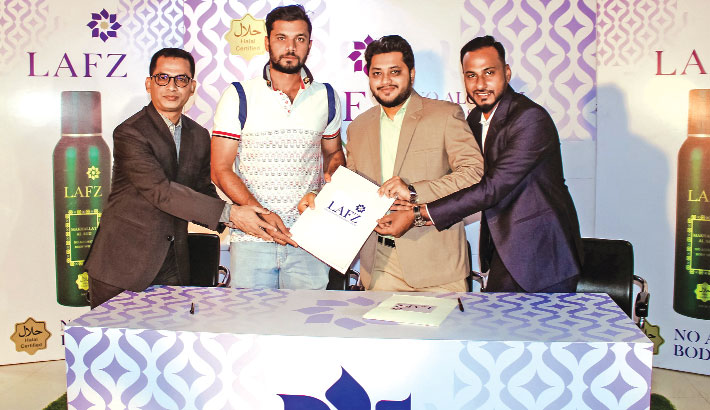 Bangladesh National Cricket Team’s ODI skipper Mashrafe Mortaza is seen along with Lafz officials during the agreement signing ceremony at a hotel in the capital on Monday.

Bangladesh National Cricket Team’s ODI skipper Mashrafe Mortaza has signed up as the brand ambassador for Singapore’s lifestyle brand Lafz International at a hotel in the capital on Monday.

Recently a one-year agreement has been signed between them.

Lafz is an Alcohol-free and Halal certified body spray brand.

Mashrafe says such initiative is good for the religious people of our country after the deal.

“It is definitely a good initiative for the religious people of the country, and I always welcome such an initiative,” Mashrafe told.

“We are very much proud to have our national hero Mashrafe in our venture and our aim is to serve the people who wants alcohol free and Halal products,” said Tanvir Mahamud.