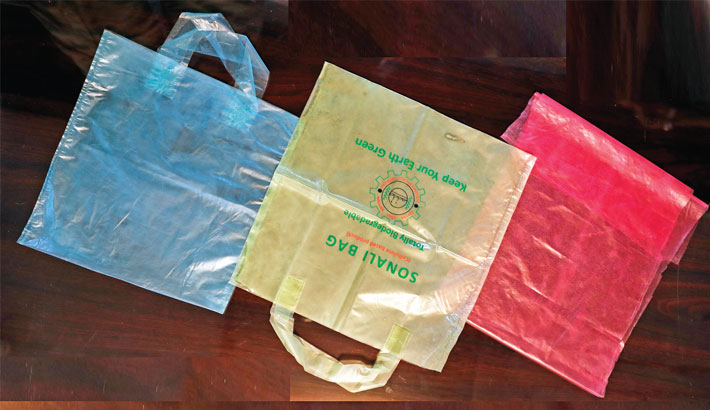 Sonali Bag, a biodegradable and environment-friendly ‘poly bag’ made of jute, will be available in the market within three months to replace harmful polythene bags.

Sources at the Ministry of Textiles and Jute said government-run Bangladesh Jute Mills Corporation (BJMC), manufacturer of Sonali Bag, is likely to start supplying it to the local market in May or June.

BJMC, which runs under the Ministry of Textiles and Jute, said the country can earn huge foreign exchange by exporting Sonali Bag after meeting the local demand.

“We’re trying to bring Sonali Bag in the market soon. We’ve taken a project to produce one lakh bags per day. We expect the supply will start within the next two or three months, secretary in-charge of the ministry Md Mizanur Rahman told the daily sun on Sunday.

“If we are successful at the initial stage of manufacturing, we’ll go for full-scale production,” he added.

Asked about the prices of the bag, Mizanur said the prices might be a little bit high initially. “We’ll see how the customers react to this new product.”

“We’re trying to make the prices reasonable. Manufacturing in automated machines is necessary to make the bag competitive in the market,” he said.

Initially, the size of the Sonali Bag would be 13inch in height and 12 inch in width. The bag will cost Tk 10 per piece.

“We can produce any type of bags in various sizes as per demand. Many super shops already requested us to provide Sonali Bag. There is a huge demand for the jute poly bag at home and abroad,” said Dr Mubarak Ahmad Khan, BJMC scientific advisor who invented the Sonali Bag.

He further said, “We are regularly running experiments on the Sonali Bag to make it usable in various ways. The quality of the jute bag also will be improved day by day.”

The BJMC earlier implemented a pilot project of the Sonali Bag at Latif Bawany Jute Mills at Demra in Dhaka and later set up a factory at Kayetpara in Demra to produce one lakh pieces of Sonali Bags per day.

The government will run campaigns to promote the use of Sonali Bags once the factory goes into commercial production, sources added.

The government will also encourage private entrepreneurs to produce jute bags to meet the huge demand at home and abroad.

A high official of BJMC said they are implementing the Sonali Bag project as part of the government’s initiatives to bring back the golden time of jute. He said the name ‘Sonali Bag’ was given by Prime Minister Sheikh Hasina.

“Farmers can make good profits from sale of jute crops like the past. Large-scale production of jute bags targeting both the local and international markets will ultimately increase the domestic use of jute and jute-made products,” said a director of the Bangladesh Jute Research Institute.

Experts said the use of poly bags for carrying vegetable, meat and fish has now become common in public life while the polythene is also being used for packaging of different items, including food and export-oriented readymade garment items.

Talking to the daily sun, Rafiqul Islam, a professor at the Department of Applied Chemistry and Chemical Engineering at Dhaka University, said: “Poly bags are made of polyethene or polypropylene materials. Those bags are not biodegradable and do not decompose in soil easily and thus affect the environment.”

The government in 2002 banned the production, marketing, sales, display, storing, distribution, transportation and use of polythene of less than 55-micron thickness for business purposes.

In 2010, it enacted a law — Mandatory Jute Packaging Act 2010 — providing for compulsory use of jute in the packaging of several products to discourage use of polythene bags.

“Poly bags are harmful not only to human health but also to the air. The chemicals used in poly and tissue bags can pollute air, plants and water. Polythene decreases the fertility of farmland and affects the biodiversity in many ways,” said Abu Naser Khan, chairman of Poribesh Banchao Andolon, a non-government environmental organisation.

Polythene bag which takes at least 400 years to decompose in the soil are also clogging the drainage system and creating water logging as polythene bag is not degradable, he added.

According to the environmental experts, the C02 assimilation rate of jute is several times higher than other trees, adding that one hectare of jute plants can consume up to 15 tons of carbon dioxide and release 11 tonnes of oxygen during the jute growing season (about 100 days).

“Sonali Bag is recyclable, reusable and has reselling value. It will be degraded within eight hours after getting in touch with water and will decompose in earth within 4-6 months. Its life can be longer as per demand,” he said.

A report said the global bioplastics market is estimated to reach $65.58 billion in 2022 while Europe and North America are expected to dominate the overall market of biodegradable packaging.

The European Union passed a strict resolution to reduce overall consumption of thin plastic bags in the region by around 80 per cent by 2019, which in turn is expected to create major growth opportunities for biodegradable plastics and paper manufacturers.

New York State lawmakers want to ban use plastic bags from retail sales to curb pollution in their area.