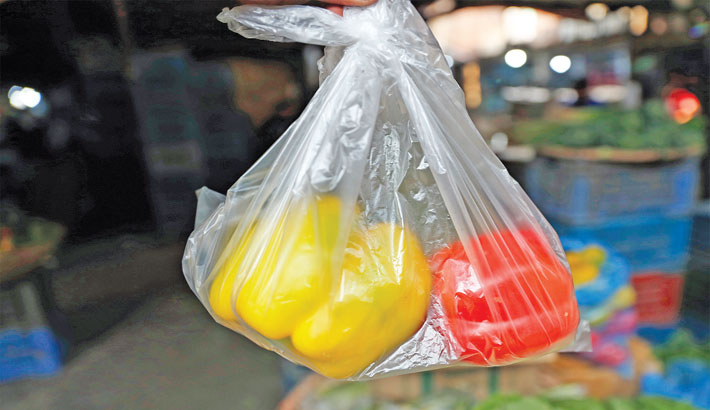 Polythene shopping bags are being produced hugely and used widely in the markets due mainly to lax monitoring of the authorities concerned.

Despite the imposition of a ban on manufacturing, trading and use of polythene bags in 2002, the use of the product has recently increased alarmingly.

Cheapness and easy availability are other reasons for its widespread use across the country.

Sources said a section of businessmen continue producing and marketing plastic bags uninterruptedly across the country, as the authorities concerned are not properly monitoring its production and use.

Though there are alternatives to polythene bags such as jute bags and net bags in the market, people are reluctant to use them since their prices are much higher than that of polythene bags.

In 2002, the government imposed a ban on the use, production and marketing of polythene bags with thickness less than 55 microns.

Polythene shopping bags are randomly being used in kitchen markets across the country.

While visiting different kitchen markets in the capital, the daily sun correspondent found that vegetable, fruit, meat and fish sellers were giving free polythene bags to their customers for carrying the purchased goods.

On March 13, a mobile court of Rapid Action Battalion (RAB) seized 85 tonnes of polythene bags and raw materials from 22 factories in Sowari Ghat area in the old part of Dhaka.

The court led by executive magistrate Sarwar Alam disconnected the electricity connections of those factories for producing the banned items. The court also fined the factories Tk 26 lakh.

The drive was conducted following an announcement of Dhaka South City Corporation Mayor Sayeed Khokon to conduct a month-long crackdown against the chemical warehouses in Old Dhaka.

The mayor made the announcement on February 25 following the tragic fire incident in Chawkbazar area of Old Dhaka. At least 71 people were killed in the incident.

The correspondent also visited some shops which sell polythene bags. The bags were being sold at Tk 210-Tk.300 per kg according to size and weight of the bags.

ESDO chairperson and former Secretary Syed Marghub Murshed said over 40 countries and 55 cities banned plastic bags. But this began in Bangladesh in 1990.