Deepika showers Anushka with love and compliments on her latest pics 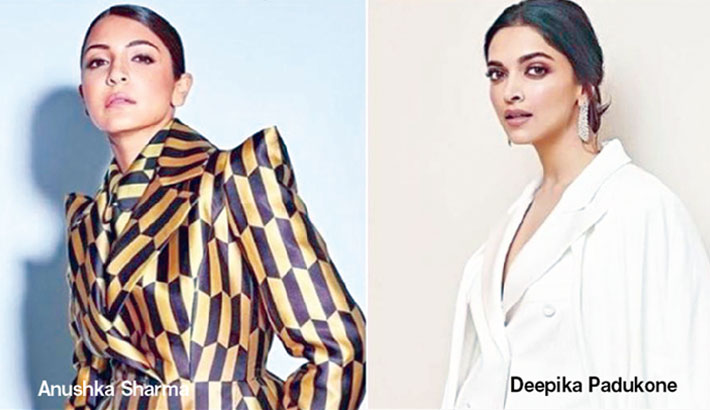 Anushka Sharma has found herself a fan of her beauty and style in Deepika Padukone. Actor Deepika Padukone is leaving compliments on actor Anushka Sharma’s pictures on Instagram. Anushka made appearances at the two back-to-back style events and looks like she won over Deepika with her style, reports Hindustan Times.

In the first picture, shared on Friday when she attended the HT India’s Most Stylish Awards, Anushka is seen in a stunning black outfit, striking an unusual pose. “LOVE!,” Deepika wrote in her comments in all caps and with a heart emoji.

The second picture is from Saturday’s GQ Style and Culture Awards 2019. Anushka wore a stylish golden and black suit that seemed inspired by a bumblebee. “Soo good,” Deepika commented on the picture with yet another heart emoji.

Anushka’s fans also showered her with compliments. “Anushka you are becoming so bold and so much good with your fashion and i ami loving it go girl,” wrote a fan. “Drop deadly gorgeous,” wrote another. However, a few other decided to poke fun at how much her outfit looked like something Deepika’s husband and actor Ranveer Singh would wear.

“Ranveer Singh ka zehar dhire dhire desh m phl rha h (Ranveer’s poison is slowly spreading through the country),” wrote one. “Looks like she took inspiration from ranveer but still gorgeous,” wrote another. The other picture with the unusual pose got fans wondering if she suffering from back pain. “Moov? Volini?,” offered a commenter. “Peethdard se pareshan? (Irritated by back pain?),” wrote another.

Anushka was last seen in Zero with Shah Rukh Khan and Katrina Kaif. The film was a flop and was panned by critics as well. She has not announced any new projects since. Deepika, meanwhile, delivered the biggest hit of her career with Padmaavat last year. She is now working with Meghna Gulzar in Chappaak. The film will release in Janurary 2020.