Hilsa sale up ahead of Pahela Baishakh 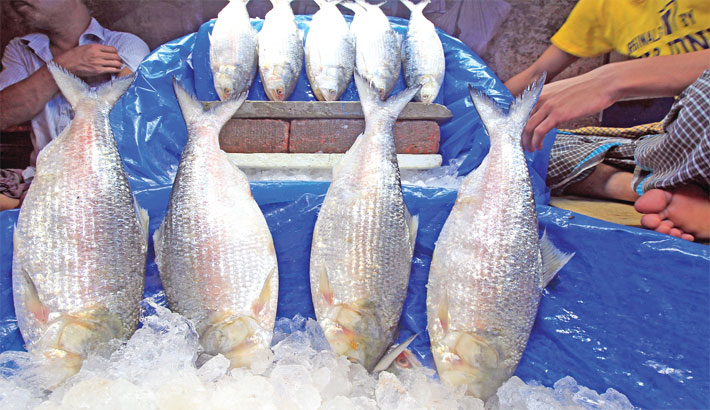 Sale of Hilsa has marked a sharp rise in the kitchen markets across the country as consumers started swarming the fish markets to buy the delicious fish ahead of Pahela Baishakh, the Bengali New Year.

Welcoming the New Year is a national festival in Bangladesh and is celebrated with much ado. A dish of panta-ilish (a combination of rice soaked in water overnight and Hilsa fried, steamed or in curry) is usually featured on the day’s menu.

This is why, demand for Hilsa increases each year at this period, traders said.

Like previous years, price of Hilsa already increased at different retail markets in the capital due to its higher demand.

But, the markets have been flooded with ‘tasteless’ Burmese (Myanmar) Hilsa due to supply shortage of local Hilsa. The fish is mainly imported from the neighbouring Myanmar while portions of it are imported from India, Vietnam and Oman, market insiders said.

A section of unscrupulous traders is importing the fish for making extra profit and selling it telling as native Hilsa. But, there is no monitoring on the part of the authorities concerned to check the deception.

Pahela Baishakh is being celebrated across Bangladesh and parts of India since  Mughal period and Hilsa is being consumed widely on the day.

A dish of panta-ilish (a combination of rice soaked in water overnight and Hilsa fried, steamed or in curry) has been an integral part of the Bengali New Year celebration for ages.

Skyrocketing prices of Hilsa have become a common practice ahead of the new year.

The two-month (March-April) ban on netting all kinds of fishes in the Hilsa sanctuary by the government allows growth of Hilsa fry.

Dr Anisur Rahman told the daily sun that massive Hilsa fishes have been netted in the Bay of Bengal and other rivers excepting the sanctuary.

He also mentioned that a large number of adult Hilsa will be available soon after the expiry of the ban period of March and April. Because, juvenile Hilsa gets enough time to get matured.

As per report of the government-owned Trading Corporation of Bangladesh (TCB) on Sunday, price of Hilsa increased by 30.77 percent than its price at the same period of the last year.

Meanwhile, many fish traders are waiting for much higher prices one or two days ahead of Pahela Baishakh.

Tanjamul Haque, a consumer, told the daily sun that prices of Hilsa increased abnormally within a few months at the kitchen markets putting extra pressure in our pockets. The government should take measures to check the trend.